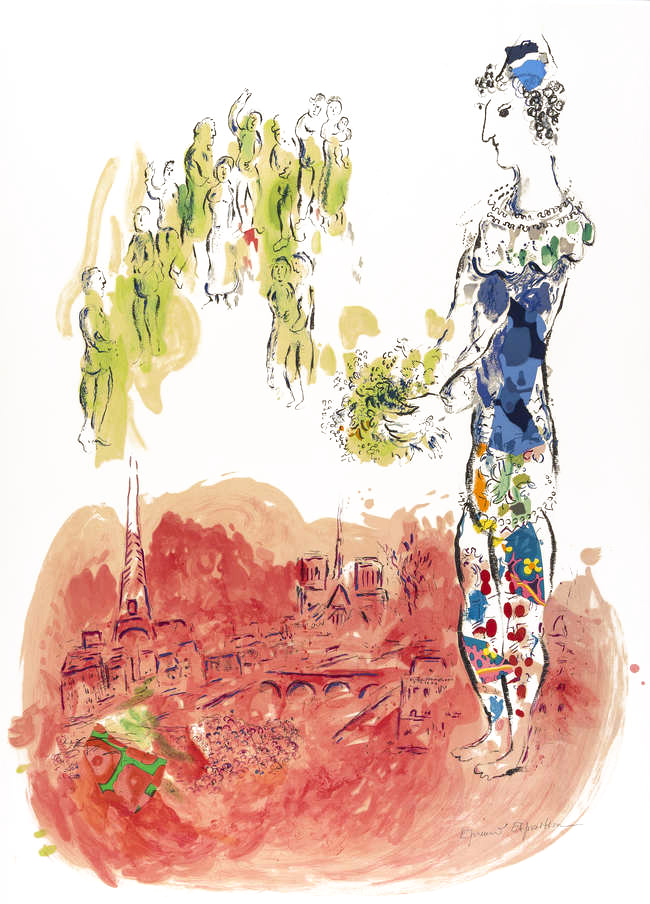 Marc Chagall Le Magicien de Paris II (The Magician of Paris II), 1969-1970 captures the beauty and charm of Paris. Depicting many of his classic Parisian icons, Chagall conveys a colorful clown, or jester, standing to the right, holding a lovely bouquet of flowers. He appears as if hovering above a red cityscape containing the Eiffel tower while a crowd gathers towards the upper left, dancing amidst shades of light green.

Of Paris Chagall states, "Each of us from his own corner of the world was drawn towards Paris, not to make a name - at that time there seemed little hope of achieving success - but in order to express himself differently, completely, and above all, to find the artistic means to give outward manifestation to inward feelings. No one can explain why, but, over the past two hundred years, only in the atmosphere of Paris has it been possible to judge the qualities and defects of a painting. I left my native land in 1910. At that moment I decided that I needed Paris. I came because I sought the light of Paris, its freedom, its refinement and the skills of the craft. Paris lit up my shadowy world like the sun." (Mourlot, Volume IV, pg. 56).

Created in 1969-1970 this color lithograph is inscribed 'Epreuve Exposition' in pencil in the lower left; aside from the numbered edition of 50; there are also 24 artist’s proofs.

Catalogue Raisonné & COA:
Marc Chagall The Magician of Paris II (Le Magicien de Paris II), 1969-1970 is fully documented and referenced in the below catalogue raisonnés and texts (copies will be enclosed as added documentation with the invoices that will accompany the final sale of the work).

About the Framing:
Framed to museum-grade, conservation standards Chagall The Magician of Paris II (Le Magicien de Paris II), 1969-1970 is presented in a complementary moulding and finished with silk-wrapped mats and optical grade Plexiglas