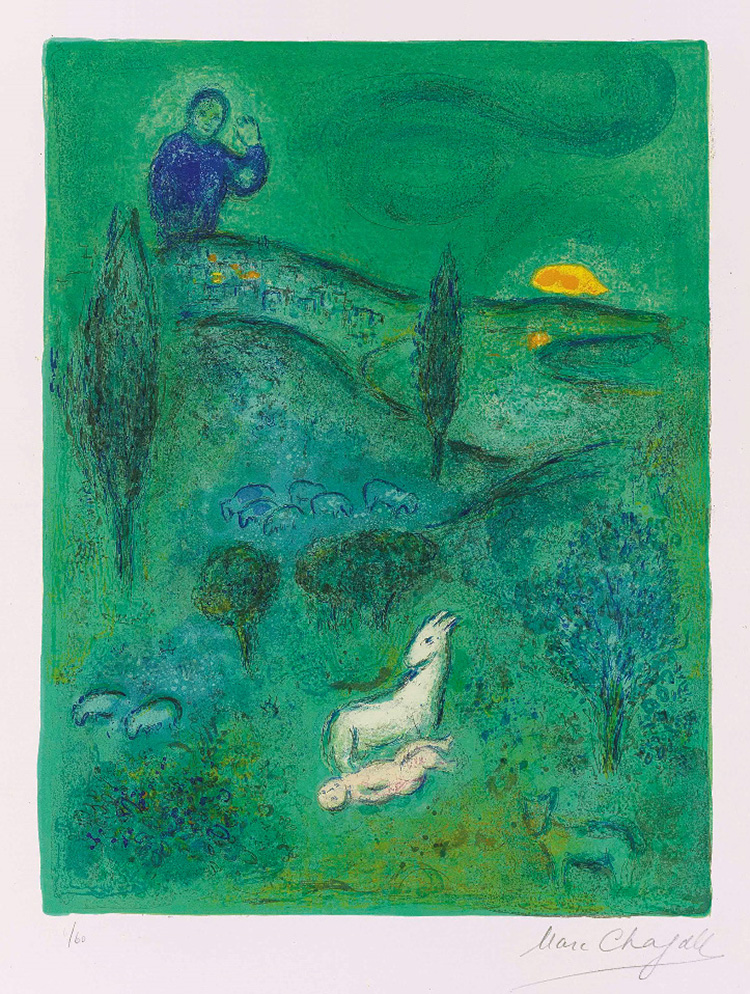 Marc Chagall’s Découverte de Daphnis par Lamon (Discovery of Daphnis by Lamon), 1961 is one of the stunning lithographs within the illustrated Daphne and Chloe series that Fernand Mourlot considered to be one of "the most important graphic works that Marc Chagall has created thus far." Chagall dedicated three years to this project and undertook a series of lithographs that perhaps defined his career, making these pieces "a work of notable importance which, unquestionably, can be placed at the top of the list of illustrated works of our time" (Mourlot 131). Daphnis and Chloe, the two romantic heroes of Greek writer, Longus, are two childhood friends who undergo the trials and tribulations of growing up and, consequently, falling in love. Evoking the rich Mediterranean landscapes from which Chagall personally drew inspiration, this work is a masterpiece any Chagall enthusiast would admire.

Against a richly saturated green pasture, Marc Chagall’s Découverte de Daphnis par Lamon (Discovery of Daphnis by Lamon), 1961 illustrates the part in Longus’ tale Daphnis et Chloe when the protagonist Daphnis is found by the goatherd Lamon who will raise him as his own. This plot point in the tale is mirrored by Daphnis’ eventual love interest Chloe, who is also abandoned and found by a shepherd who will raise her as his own. Not much is known about the author or historical context of Daphnis et Chloe, so Chagall’s representations of the figures and scenes in the book are drawn from the artist’s own imagination. Chagall travelled to Greece twice to gather inspiration before creating his Daphnis et Chloe series: the first time to gather inspiration for his initial gouaches, and the second time to determine if his first renderings captured what he felt was the emotional experience of Greece. The pink-fleshed figure of baby Daphnis is highlighted against an overwhelming sea of green and framed by the crisp white of the goat standing over it. Through color, Chagall visually renders Daphnis as the subject of Découverte de Daphnis par Lamon (Discovery of Daphnis by Lamon), 1961 just as Daphnis is the protagonist in the tale of Daphnis et Chloe.

Created in 1961, Marc Chagall’s Découverte de Daphnis par Lamon (Discovery of Daphnis by Lamon), 1961 is a color lithograph on Arches paper. This work is hand-signed by Marc Chagall (Vitebsk, 1887 - Saint-Paul, 1985) in the lower right margin. Numbered from edition of 60 in the lower left margin.

Marc Chagall’s Découverte de Daphnis par Lamon (Discovery of Daphnis by Lamon), 1961 is fully documented and referenced in the below catalogue raisonnés and texts (copies will be enclosed as added documentation with the invoices that will accompany the sale of the work).