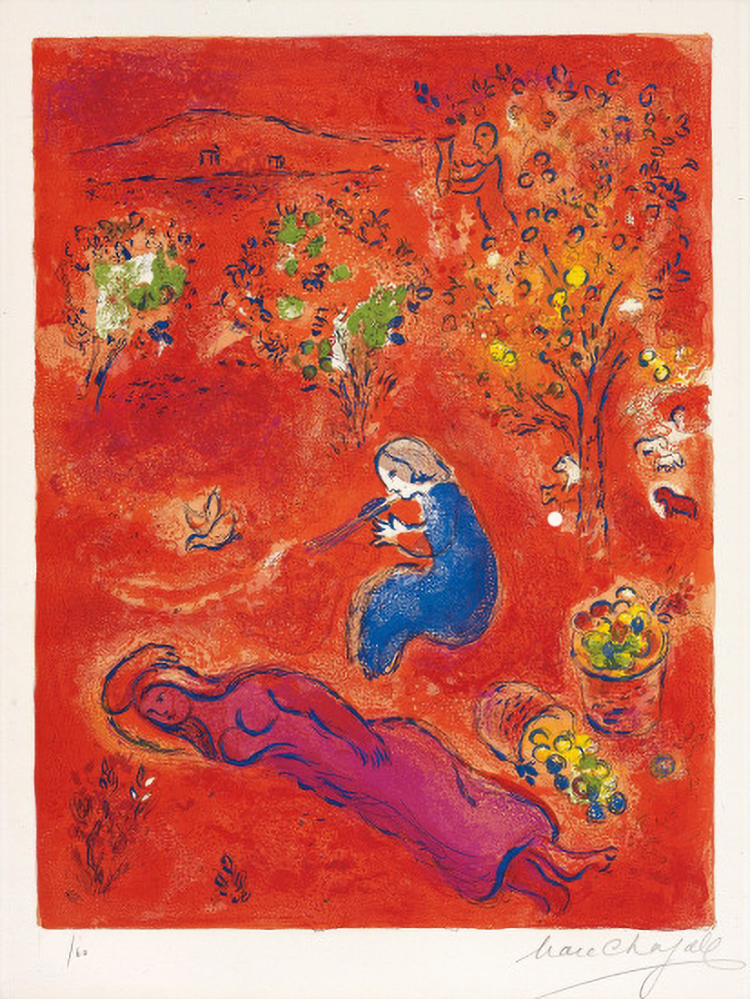 Marc Chagall’s A Midi, l’Été (Noon, in summer), from Daphnis et Chloé, 1961 is one of the stunning lithographs within the illustrated Daphne and Chloe series that Fernand Mourlot considered to be one of "the most important graphic works that Marc Chagall has created thus far." Chagall dedicated three years to this project and undertook a series of lithographs that perhaps defined his career, making these pieces "a work of notable importance which, unquestionably, can be placed at the top of the list of illustrated works of our time" (Mourlot 131). Daphnis and Chloe, the two romantic heroes of Greek writer, Longus, are two childhood friends who undergo the trials and tribulations of growing up and, consequently, falling in love. Evoking the rich Mediterranean landscapes from which Chagall personally drew inspiration, this work is a masterpiece any Chagall enthusiast would admire.

Marc Chagall’s A Midi, l’Été (Noon, in summer), from Daphnis et Chloé, 1961 encapsulates the vivid color and dreamlike atmosphere that characterize the beauty of Chagall’s oeuvre. Against a background completely engulfed in ruby red sits the figure of Daphnis playing a pipe and clothed in lapis lazuli blue. The juxtaposition of richly saturated warm and cool colors magnifies the presence of Daphnis’ figure, making him appear to be the only figure in the scene. However, the figure of Chloe lies along the lower left foreground in a magenta color that nearly blends into the red constituting the entirety of this image. While Chloe visually melds into the setting, Daphnis becomes the focal point of the composition. In this way, Chloe’s figure conveys a sense of emotional synchronicity with the landscape, while the centrality and brightness of Daphnis’ figure aligns with the act of serenading. By reimaging the world of the two youthful protagonists through his surreal visual language, Chagall imbues this moment from Daphnis et Chloé with robust emotionality.

Created in 1961, Marc Chagall’s A Midi, l’Été (Noon, in summer), from Daphnis et Chloé, 1961 is a color lithograph on Arches paper. This work is hand-signed by Marc Chagall (Vitebsk, 1887 - Saint-Paul, 1985) in the lower right margin. Numbered from edition of 60 in the lower left margin.

Marc Chagall’s A Midi, l’Été (Noon, in summer), from Daphnis et Chloé, 1961 is fully documented and referenced in the below catalogue raisonnés and texts (copies will be enclosed as added documentation with the invoices that will accompany the sale of the work).

Framed to museum-grade, conservation standards, Marc Chagall’s A Midi, l’Été (Noon, in summer), from Daphnis et Chloé, 1961 is presented in a complementary moulding and finished with silk-wrapped mats and optical grade Plexiglas.