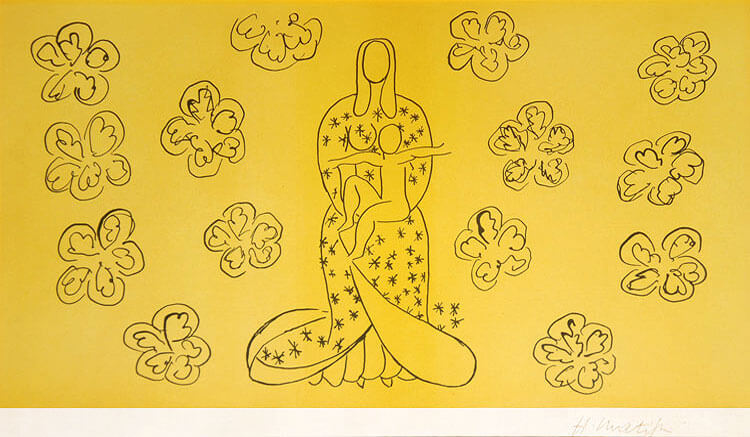 Henri Matisse La Vierge et l'Enfant (Virgin and Child), 1949, at first glance is a rather simple figural composition on a stunning yellow background that is filled in with flowery rosettes. Equal numbers on either side of the figures creates an understated symmetry that pleases the eye. Central in the image is a mother and child – presumably the Virgin Mary and baby Jesus. Both figures are rendered with sweeping and unbroken lines, that gently carve the figures out of the yellow background, Mary stands facing frontal, and the stars that dapple her robe mirror the black rosettes on the background, bringing a stunning harmony to the lithograph. Jesus sits, cradled in her arms. His blank face stands in for her left breast, which is completely hidden, but also formed, by his head. Jesus stretches his arms wide in a welcoming gesture that also mirrors the cross.

The symbolism in both the gesture and the illusion to the cross relates the lithograph to its purpose. La Vierge et l’Enfant, 1949 was created by Matisse as part of the La Chapelle du Rosaire project, which was a collaboration between Matisse himself and a close friend, Monique Burgeois, who had recently become a Sister in the Dominican order. Chapelle du Rosaire resides in Vence, a town in the French Riviera and is sometimes called the Matisse Chapel.

Created in 1949, this Henri Matisse La Vierge et l’Enfant is a lithograph hand-signed by Henri Matisse (Le Cateau-Cambrésis, 1869 – Nice, 1954) in ink in the lower right margin. From the edition of 60.

About the Framing:
Framed to museum-grade, conservation standards, Henri Matisse Virgin and Child (La Vierge et l’Enfant), 1949 is presented in a complementary moulding and finished with silk-wrapped mats and optical grade Plexiglas.