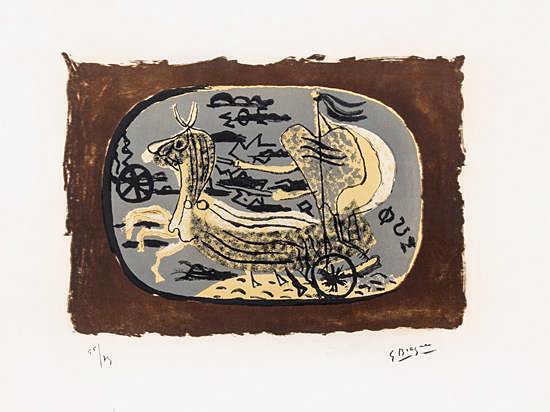 Georges Braque Phaéton, Char I (Phaethon, Chariot I), 1945 originates from Greek mythology and is filled with symbolic power. Phaeton refers to the son of the God Helios who was responsible for driving a horse chariot with the sun from one side of the Earth to the other. However, one day, the arrogant Phaeton believed he could drive the chariot himself and met a catastrophic end. The story is a warning against pride and arrogance. Furthermore, considered an ancient symbol of power and glory, the chariot is delved with history that dates back to 2000 B.C. Braque tapped into this inherent history and mythology as he created this exciting and eventful scene.

Featuring rearing horses in flight while pulling a chariot behind them, this work is full of movement and action. Composed of curvy lines, the satirical chariot driver lacks a face but appears caught up in the chaos and action, as their hair blows back into the wind. Braque utilizes a brilliant color contrast between the shades of brown, crème, and light blue and frames the story as if the viewers are looking back in time.

Created in 1945, this color lithograph with a partial Arches watermark is hand-signed by Georges Braque (Argenteuil-sur-Seine, 1882- Paris, 1963) in pencil in the lower right margin. Numbered from the edition of 75 in pencil in the lower left margin; published by D.-H. Kahnweiler, Paris, printed by Mourlot, Paris.

Catalogue Raisonné & COA:
Geroges Braque Phaethon, Chariot I (Phaéton, Char I), 1945 is fully documented and referenced in the below catalogue raisonnés and texts (copies will be enclosed as added documentation with the invoices that will accompany the final sale of the work).

1. Vallier, Dora. Braque: The Complete Graphics. 1982. Listed and illustrated as catalogue raisonné no. 26

2. A Certificate of Authenticity will accompany this color etching and aquatint.

About the Framing:
Georges Braque Phaethon, Chariot I (Phaéton, Char I),1945 is framed to museum-grade, conservation standards, presented in a complimentary moulding and finished with silk-wrapped mats and optical grade Plexiglas.