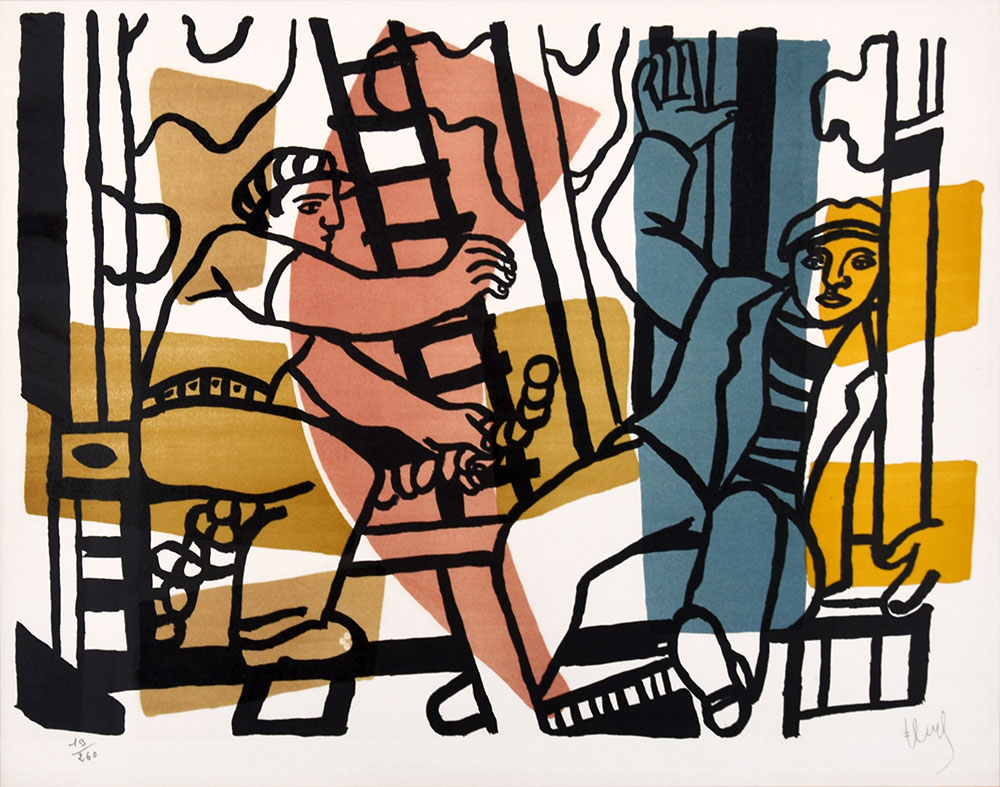 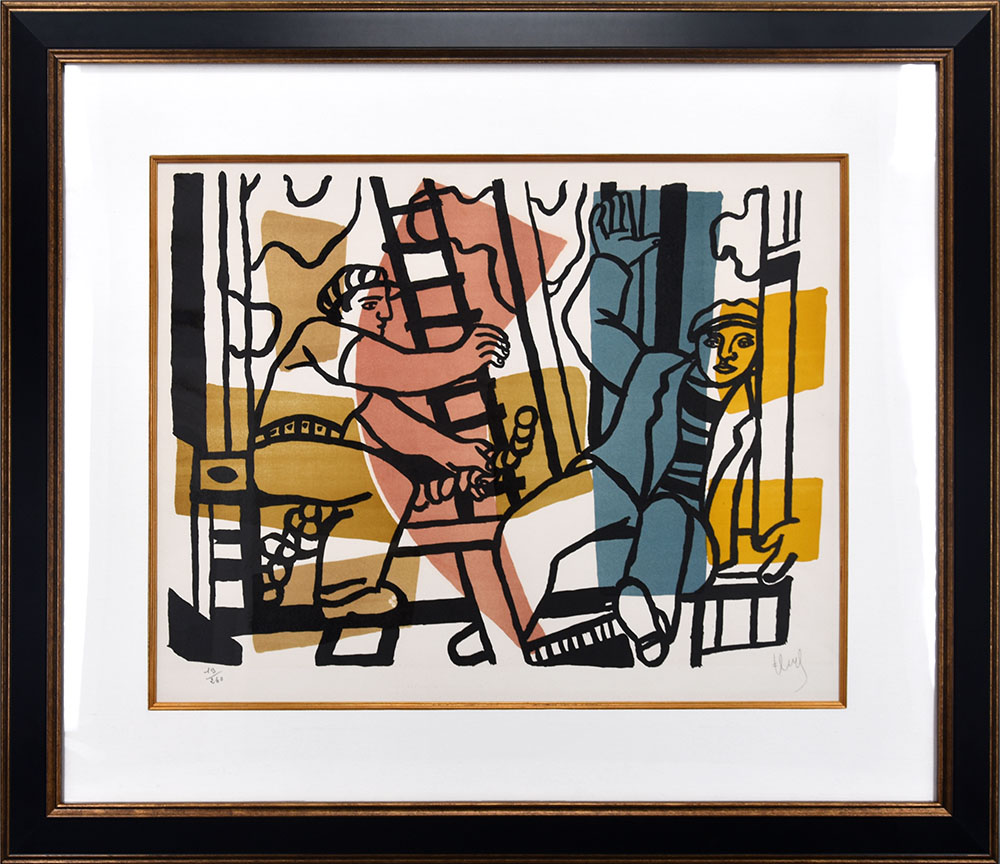 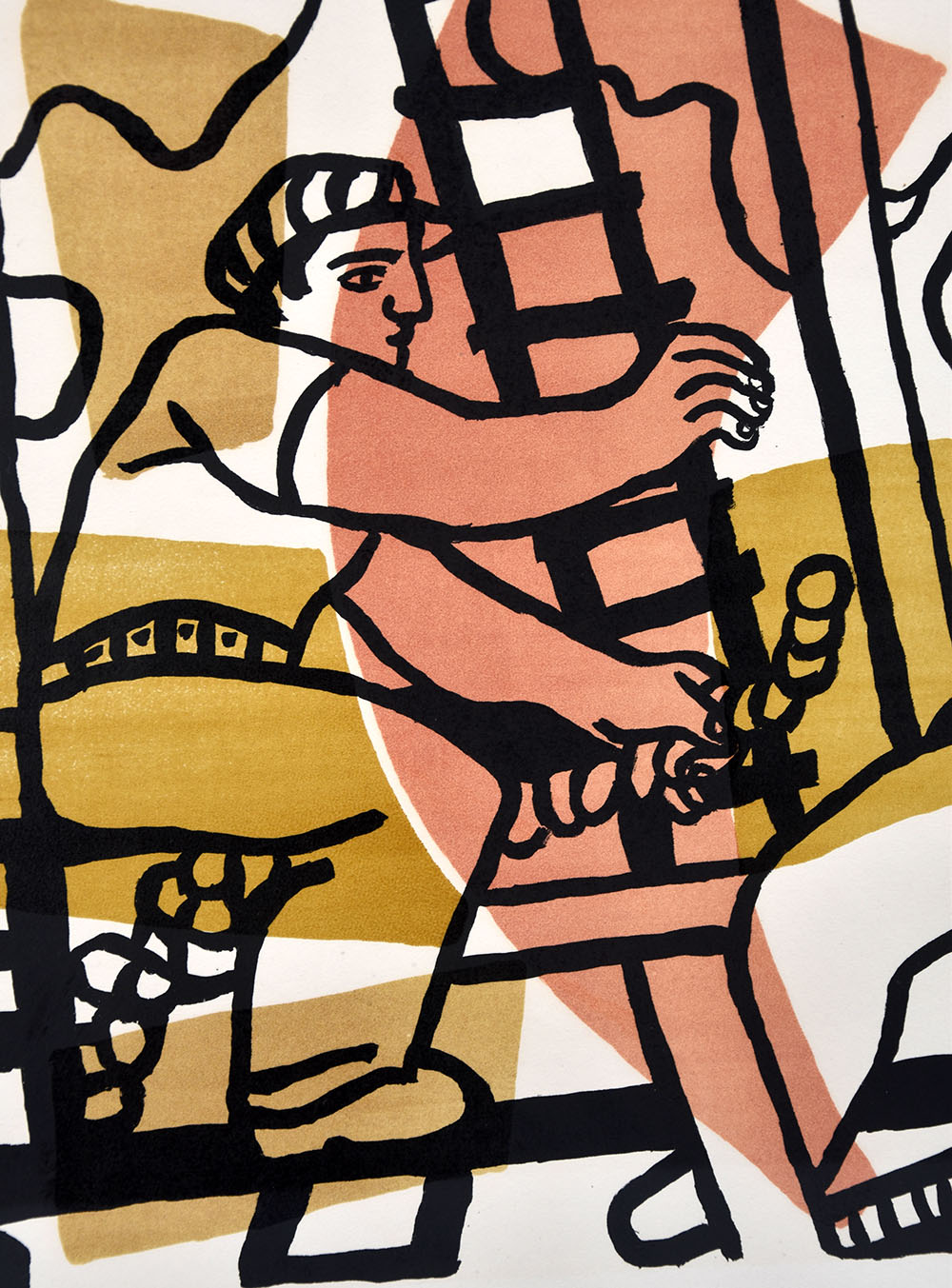 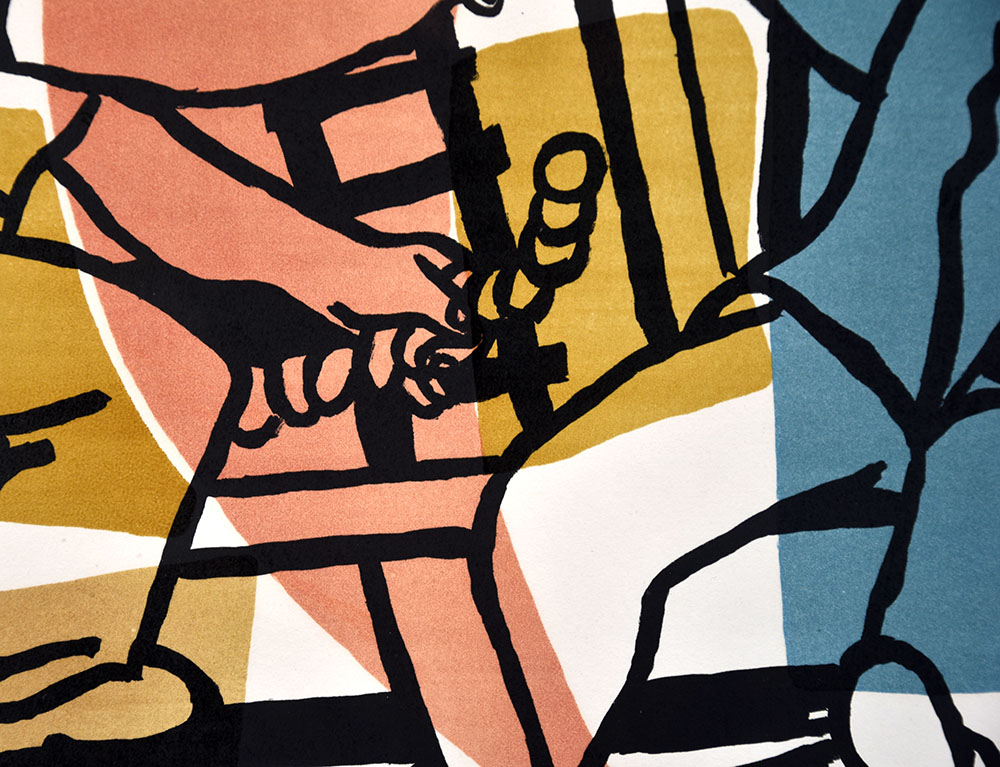 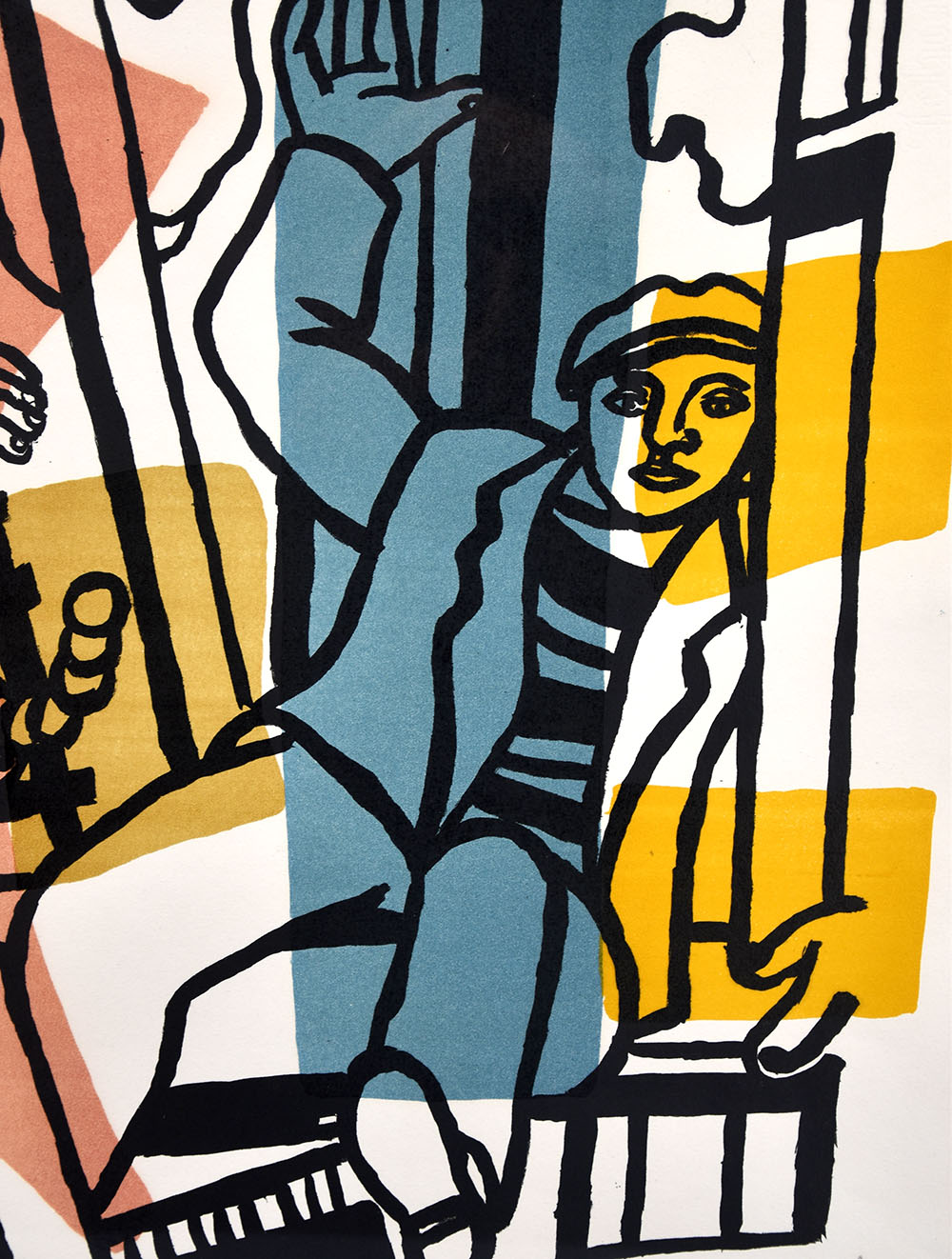 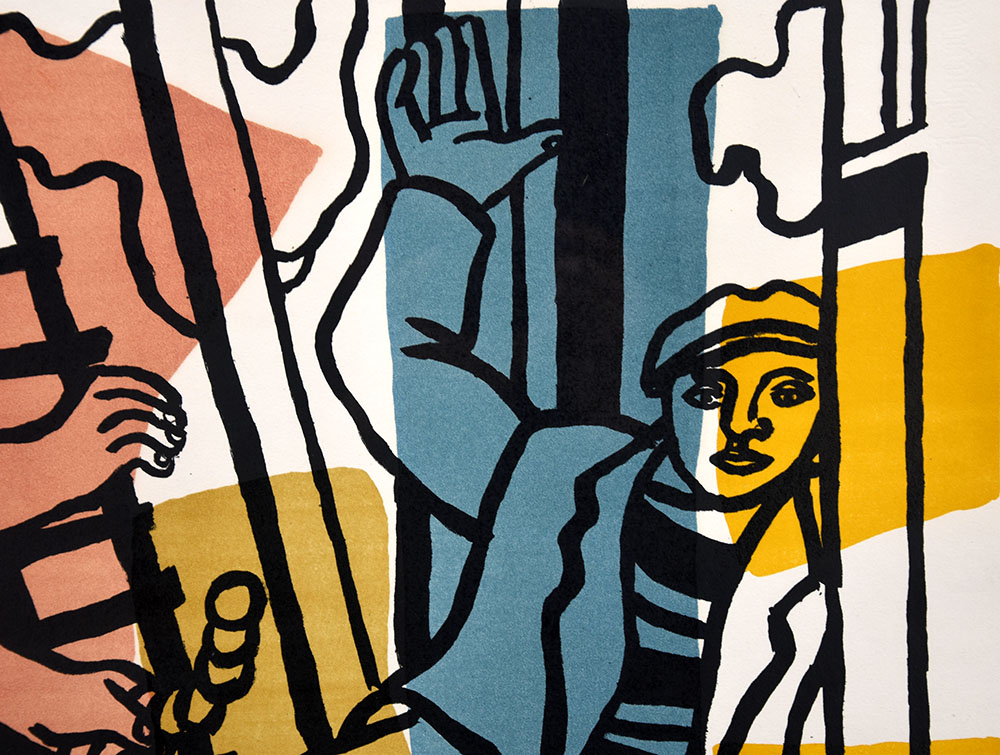 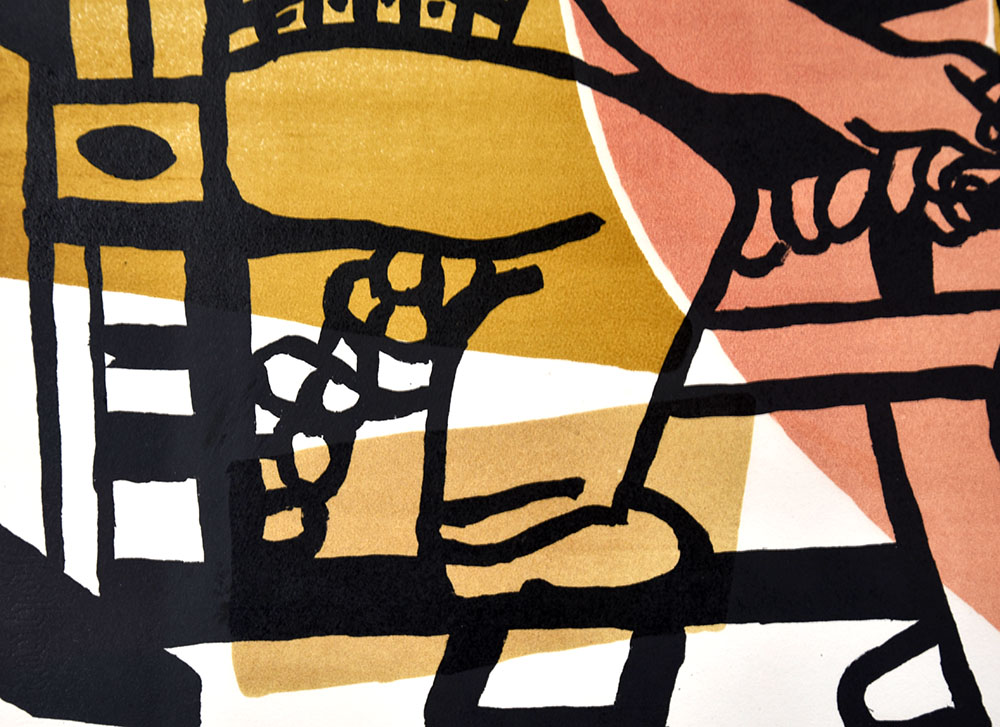 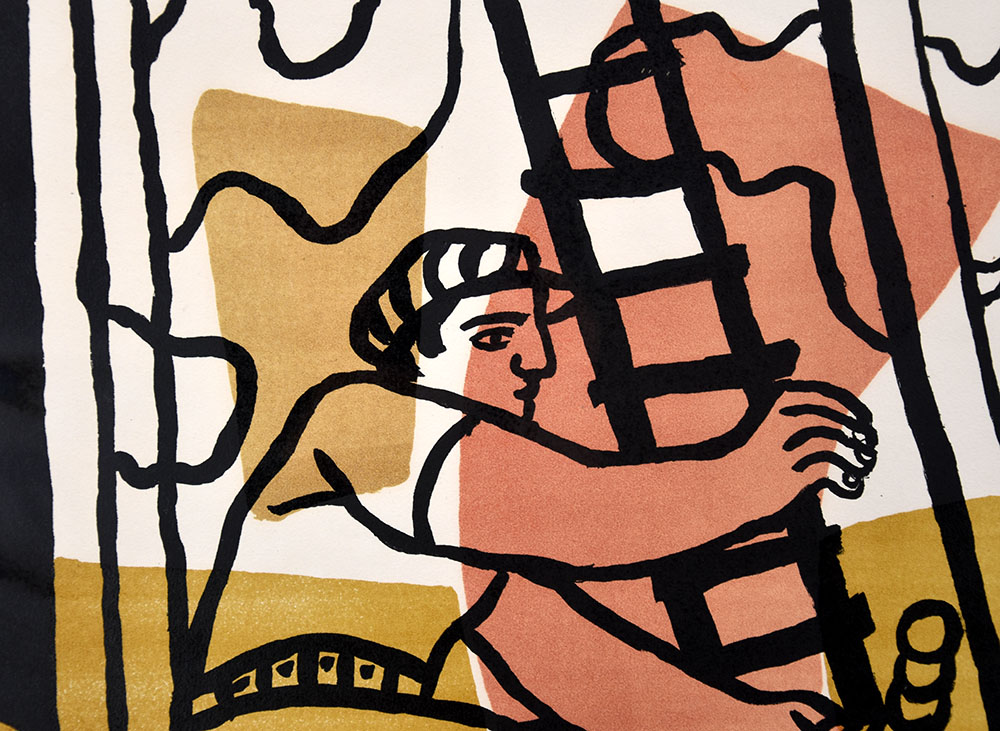 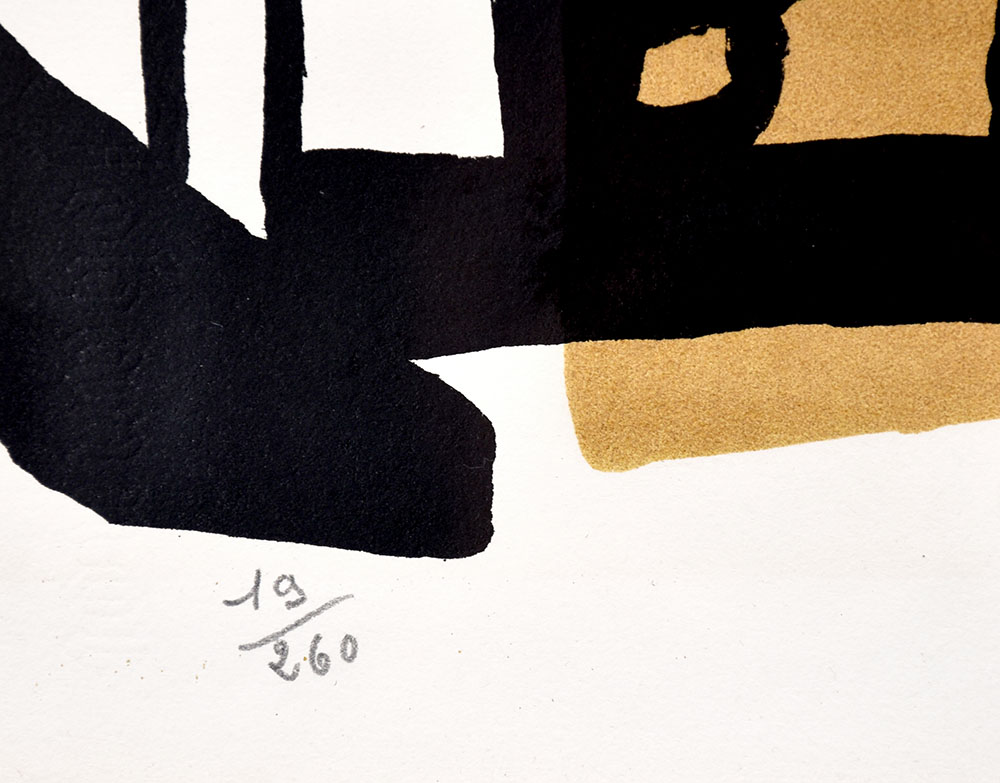 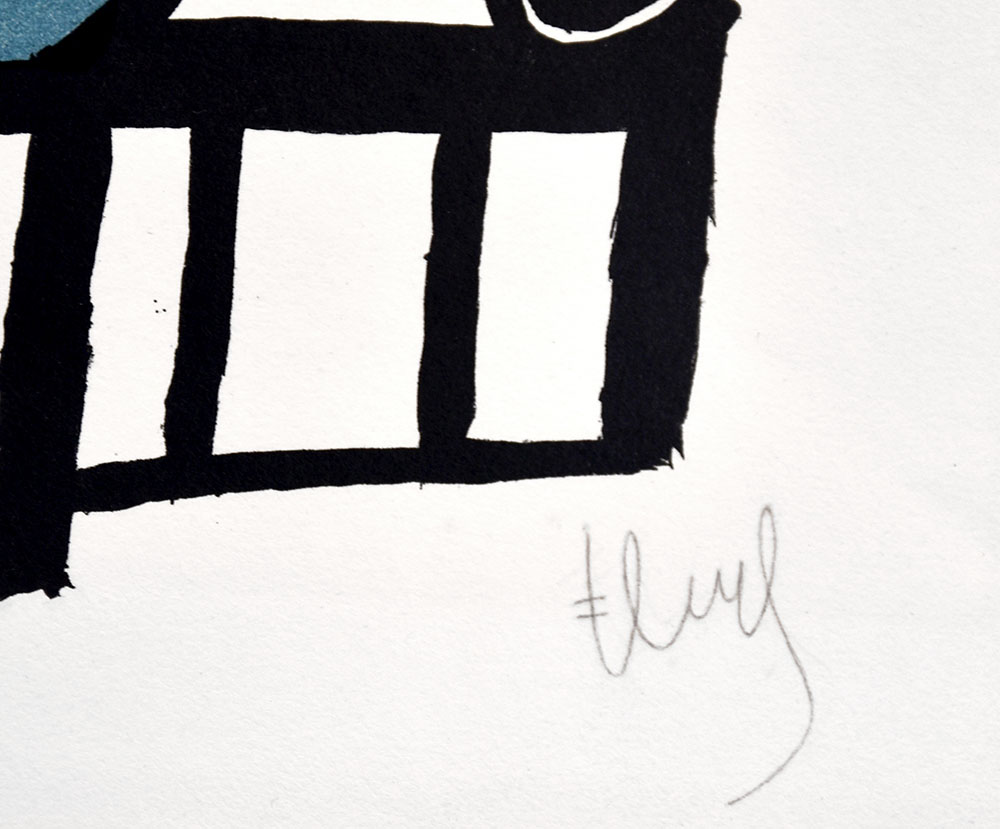 Fernand Léger Les Constructeurs (The Builders), 1955 is a colorful and beautifully rendered image. Displaying two men seated in the scaffolding of a building, Léger carefully constructs an image defined by structure and weightlessness, qualities that characterizes the construction of multistoried building. Of this series Léger has stated: I took Les Constructeurs down to the Renault factory, and they were hung on the walls of the canteen. The blokes came in at twelve. They looked at the pictures whilst they were eating. Some of them sniggered 'Just look at them! Those blokes could never move with hands like that!' In fact they were making judgments and comparisons. My pictures seemed funny to them. They didn't understand them. Sadly eating my soup I listened to them. I went back to eat at the canteen eight days later. The atmosphere was different. The blokes weren't laughing any more, they weren't looking at the paintings. Nevertheless, quite a few of them, while eating, glanced up, had a quick look at the pictures before digging into their plates again. Who knows if the canvases intrigued them or not. But when I was getting ready to go one of the blokes came up to me: 'You're the painter, aren't you? You'll see. My mates are going to notice the difference when you take your paintings away. When they'll be looking at blank wall in front of them, my mates are going to realize what your colours are like…' that the kind of statement that gives on pleasure" (Francia, 204 - 205).

Created in 1955, this color lithograph is hand-signed by Fernand Léger (Argentan, 1881- Gif-sur-Yvette, 1955) in ink in the lower right margin and numbered from the edition of 260 in pencil in the lower left margin.

Catalogue Raisonné & COA:
Fernand Léger The Builders (Les Constructeurs), 1955 is fully documented and referenced in the below catalogue raisonnés and texts (copies will be enclosed as added documentation with the invoices that will accompany the sale of the work).

1. Saphire, Lawernce. Fernand Léger, The Complete Graphic Works, 1978. Another example is listed and illustrated as catalogue raisonnè no. 141 and further discussed on pgs. 285-286.
2. A Certificate of Authenticity will accompany this work.

About the Framing:
Framed to museum-grade, conservation standards, Fernand Léger The Builders (Les Constructeurs), 1955 is presented in a complementary moulding and finished with silk-wrapped mats and optical grade Plexiglas