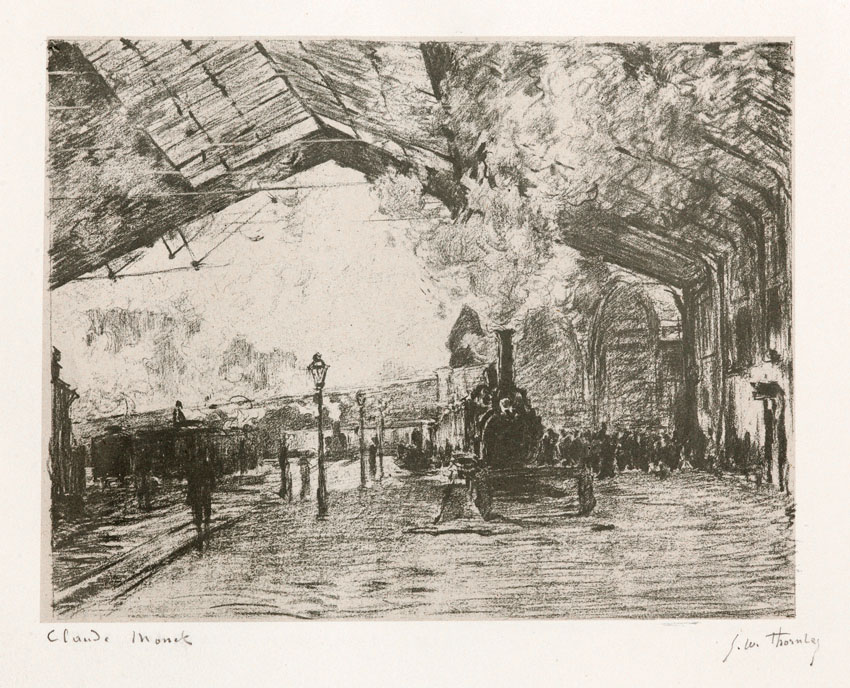 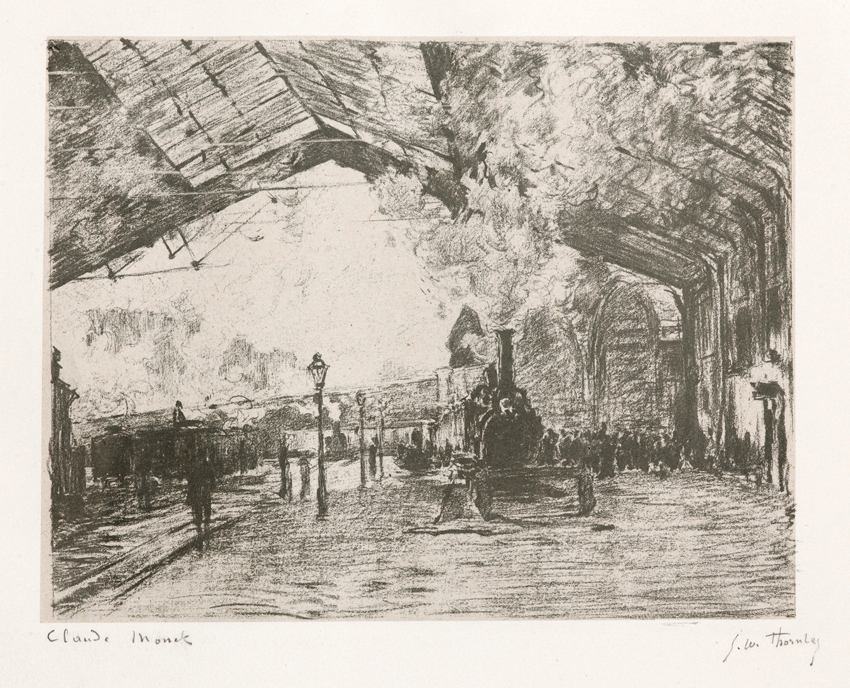 Monet La Gare Saint –Lazare, le train de Normandie (Arrival of the Normandy Train), c. 1890-1908 showcases a steam engine train slowly arriving to its destination. In 1877, Monet moved to a flat that was close to the station. He then established himself as the most prominent painter of the station, determined to capture this symbol of technological progress. The billowing smoke against the glass ceiling of the station creates a subtle illusion and brings about the dissolution of form. Though the train is made of metal, it appears weightless through Monet’s distinct illustration. In describing the station, Emile Zola wrote “An express locomotive, with its two vast, devouring wheels, stood alone, while the thick, black smoke of its smokestack rose slowly, vertically into the calm air…and he saw emerging from the bridge a whiteness profuse and swirling like a bank of snow, taking flight through its array of iron girders (Wildenstein, 128).” It is very possible Zola took inspiration from Monet’s painting when creating this passage. Thus Monet transforms an industrial environment into a dreamscape.

Created circa 1890-1908, this color lithograph on chine appliqué on wove paper was created after an original painting of the same title and is hand-signed by Claude Monet (Paris, 1840 - Giverny, 1926) in pencil in the lower left margin; also hand-signed by the engraver G. W. Thornley in pencil in the lower right margin; From an edition of 25 hand-signed proofs by both Claude Monet (Paris,1840 - Giverny, 1926) and G.W. Thornley (there was a further edition of 100 that were not signed by Monet but has a block stamp); printed by Belfond & Cie.

Monet Arrival of the Normandy Train (La Gare Saint –Lazare, le train de Normandie), c. 1890-1908 is fully documented and referenced in the below catalogue raisonnés and texts (copies will be enclosed as added documentation with the invoices accompanying the sale of the work):

ABOUT THE FRAMING:
Monet Arrival of the Normandy Train (La Gare Saint –Lazare, le train de Normandie), c. 1890-1908 is framed to museum-grade conservation standards, this work is presented in a complementary moulding with silk mats and optical-grade Plexiglas.