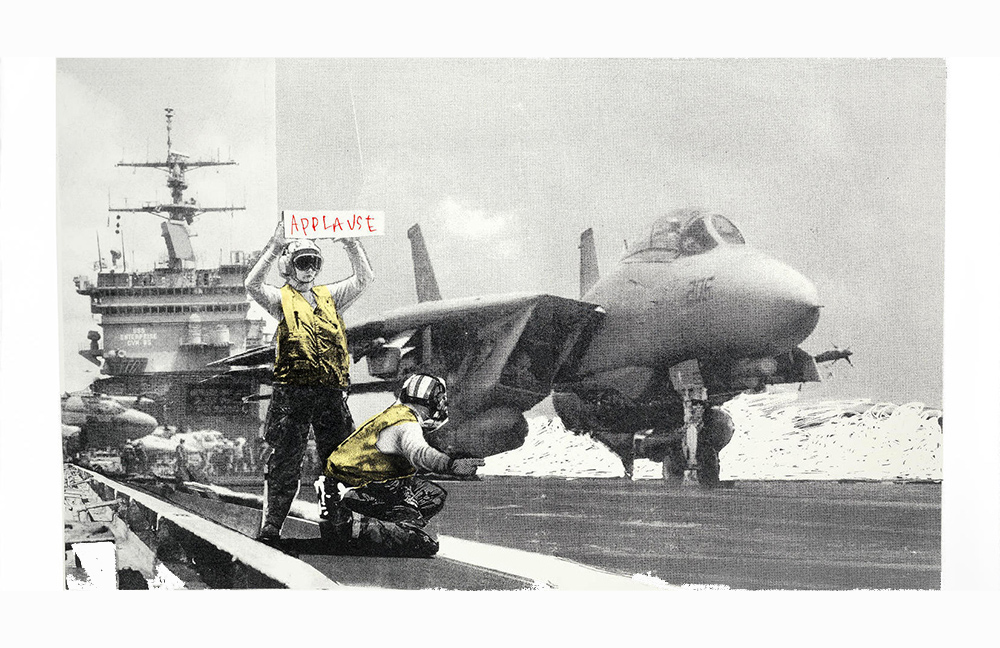 Originally from the iconic Barely Legal Print Set, Banksy’s Applause, 2006 depicts a fighter jet on a runway of a huge aircraft carrier with two air traffic controllers wearing high-visibility jackets, preparing the fighter jet for take-off. The likeness of the screenprint was taken from a well-known image of former American President George W. Bush deploying a military bomber, though the original photo it was based off does not have the two air traffic controllers, and a crowd in the background. In Banksy’s portrayal of this image, the crowd has been scribbled out, leaving large sections of white with circular scratch marks in the background peeking through the scratch lines. The two air traffic controllers were also added in, with one of the holding a sign above his head with the word ‘Applause’ in bright red, which is meant to highlight the trivialization of serious issues, such as military power. The grainy texture of the screenprint resembles tv static, as if it was something far removed from our thoughts, the only color coming from the yellow of the vests and the red sign, highlighting their importance and directing your eye.  In another work of Banksy’s, he stated “If at first you don’t’ succeed, call an airstrike”, which is relevant to his personal views of how dramatic political and war events are treated as forms of entertainment and this becomes apparent in this monochromatic statement piece.

Created in 2006, this color screenprint in hand-signed and dated by Banksy in pencil. Numbered from the edition of 150 in pencil. Published by Pictures on Walls, London.

Catalogue Raisonné & COA:
Banksy Applause, 2006 is fully documented and referenced in the below catalogue raisonnés and texts (copies will be enclosed as added documentation with the invoices that will accompany the sale of the work).

About the Framing:
Framed to museum-grade, conservation standards, Banksy Applause, 2006 is presented in a complementary moulding and finished with silk-wrapped mats and optical grade Plexiglas.

Have one to sell? Sell Banksy fine art with us

Sell Banksy artwork with us. We will research its value and popularity for you.