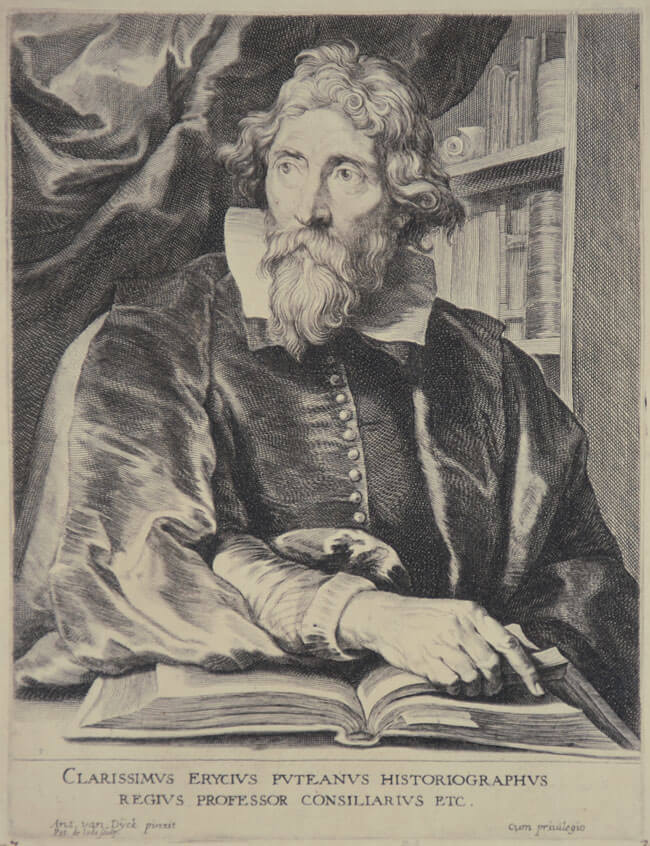 A wonderfully detailed and charismatic portrait, this exquisite work illustrates the technical mastery and artistic vision of Van Dyck. Puteanus' stately yet approachable expression reflects Van Dyck's refined ability to comfort and relax his subjects, resulting in a realistic and acute portrait. Puteanus was a humanist, philologist, and ecyclopedist. He was greatly respected during his time and honored with favors by reigning princes. The Archduke Albert appointed him his honorary counselor in 1612 while he also filled the post of historiographer to Philip IV of Spain on behalf of the Milanese. He was very outspoken which often provoked political animosities and nearly got him driven into exile by King James I of England, who incorrectly thought that he had written an injurious lampoon. Van Dyck depicts Puteanus as learned and scholarly. He conveys him in a library with a book open before him, as if captured in the midst of a pensive moment while at his studies.

This portrait is a Mauquoy-Hendrickx State VI (of VI), engraved by Pieter de Jode (Antwerp, 1606 - Antwerp, 1674) in collaboration with Anthony van Dyck (Antwerp, 1559 - London, 1641) as part of his Iconographie series of engraved portraits of famous people at the time. The plate has been marked in the lower left of the plate "Ant. van Dyck pinxit" and 'Pet. De Iode fculp" and in the lower right of the plate "Cum privilegio." Beneath the engraved portrait is the inscription: CLARISSIMVS ERYCIVS PVTEANVS HISTORIOGRAPHVS | REGIVS PROFESSOR CONSILIARIVS ETC. This piece is printed on a fine paper with the Foolscap with Seven Pointed Collar watermark (Mauquoy-Hendrickx no. 135), dating the piece to c. 1675.