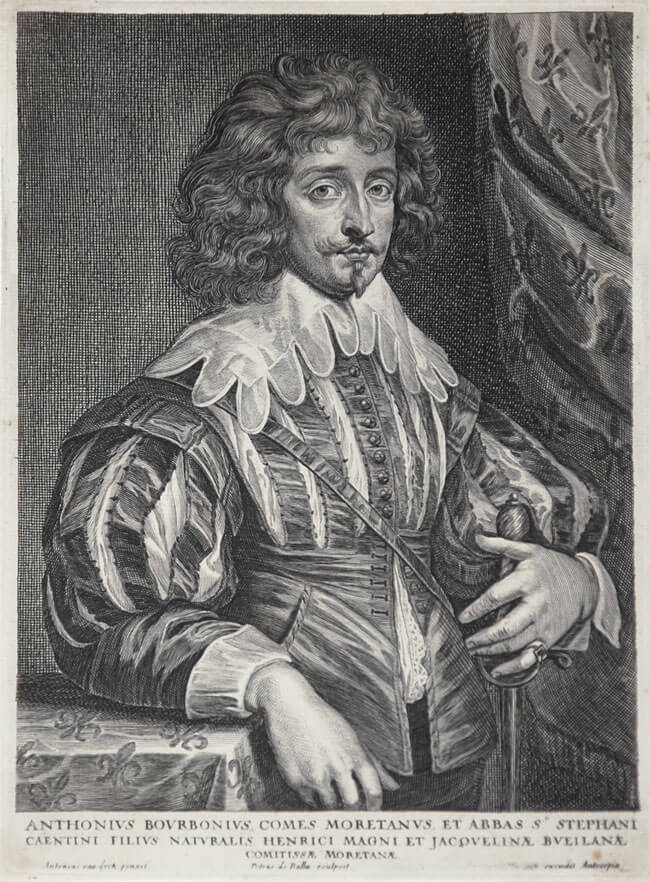 A wonderfully detailed and charismatic portrait, this exquisite work illustrates the technical mastery and artistic vision of Van Dyck. De Bourbon's stately yet approachable expression reflects Van Dyck's refined ability to comfort and relax his subjects, resulting in a realistic and acute portrait. Antoine de Bourbon was the Count of Moret and a legitimized son of the French King Henry IV (1553 - 1610) and his mistress Jacqueline de Bueil (1588 - 1651). De Bourbon conspired with Gaston d'Orleans against the policy for the establishment of a strong Royal Government but was killed in battle. However, legend has it that he survived the battle and carried on the life of a hermit in Anjou. De Bourbon was also the main character in the 1866 novel "Le Comte de Moret" by Alexandre Dumas (1802 - 1870). Van Dyck depicts him in a manner fitting of royalty, in rich garbs, a large stone sparkling on his pinky finger.

This portrait is a Mauquoy-Hendrickx State IV (of IV) engraved by Petrus de Ballu in collaboration with Anthony van Dyck (Antwerp, 1559 - London, 1641) as part of his Iconographie series of engraved portraits of famous people at the time. The plate has been marked in the lower left of the plate "Antonius van dyck pinxit" and marked 'Petrus de Ballu sculpsit" in the lower center of the plate. Also marked "excudit Antverpie" in the lower right. Beneath the engraved portrait is the inscription: ANTHONIVS BOVRBONIVS COMES MORENTANVS ET ABBAS 5TH STEPHANI | CAENTINI FILIVS NATVRALIS HENRICI MAGNI ET JACQVELINÆ BVEILANÆ | COMITISSÆ MORENTANÆ.

Catalogue Raisonné & COA:
Anthony Van Dyck Antonius Bourbonius (Antoine de Bourbon), c. 1645 is fully documented and referenced in the below catalogue raisonnés and texts (copies will be enclosed as added documentation with the invoices that will accompany the sale of the work).