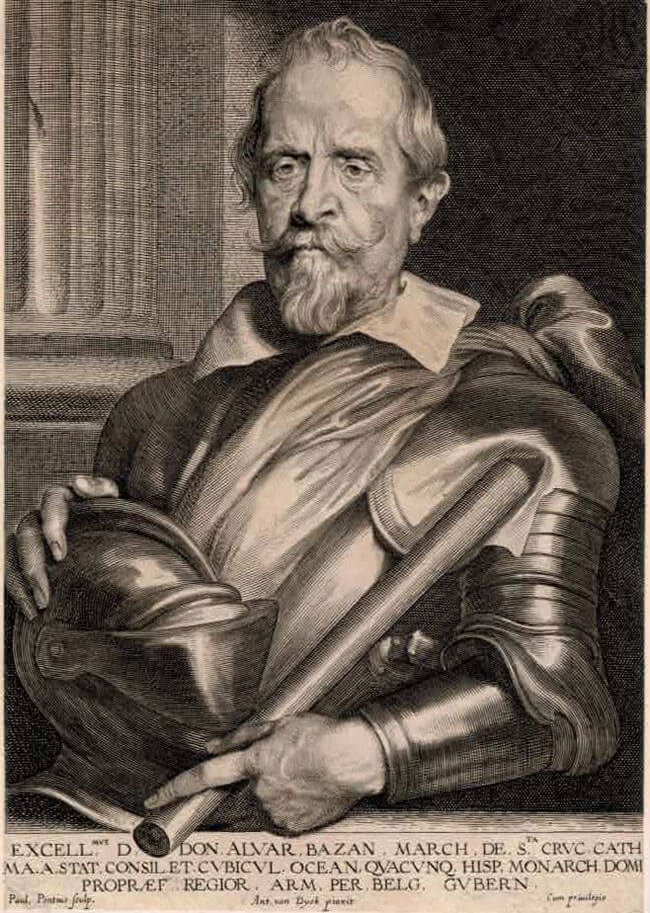 A wonderfully detailed and charismatic portrait, this exquisite work illustrates the technical mastery and artistic vision of Van Dyck. Alvaro de Bazan's stately yet approachable expression reflects Van Dyck's refined ability to comfort and relax his subjects, resulting in a realistic and acute portrait. De Bazan was a Spanish admiral and the Marquis of Santa Cruz. His father was the commander-in-chief of the Spanish naval forces in the Mediterranean and taught him from an early age how to command the navy. De Bazan is credited with having the first definite suggestion of the Spanish Armada upon recognizing England's threat to the Spanish Empire. He was a strong proponent of war, but never lived to see his dream of an impressive fleet carried out due to procrastinations on the part of his king. Van Dyck depicts de Bazan in armor, with his helmet in hand. He appears somewhat weary and aged, with a weathered face, perhaps the result of the stress and wear of war and command.

This portrait is a Mauquoy-Hendrickx State V (of V) engraved by Paulus Pontius (Antwerp, 1603 - Antwerp, 1658) in collaboration with Anthony van Dyck (Antwerp, 1559 - London, 1641) as part of his Iconographie series of engraved portraits of famous people at the time. The plate has been marked in the lower left of the plate "Paul Pontius fculp." Also marked "Cum privilegio" in the lower right of the plate and "Ant. Van Dyck pinxit" in the lower center. Beneath the engraved portrait is the inscription: EXCELL. MVS D. DON. ALVAR. BAZAN. MARCH. DE. S.TA CRVC. CATH | MA. A. STAT. CONSIL. ET. CVBICVL. OCEAN. QVACVNQ. HISP. MONARCH. DOMI | PROPRÆF REGIOR. ARM. PER. BELG. GVBERN.

Catalogue Raisonné & COA:
Anthony Van Dyck Alvaro de Bazan, c. 1645  is fully documented and referenced in the below catalogue raisonnés and texts (copies will be enclosed as added documentation with the invoices that will accompany the sale of the work).