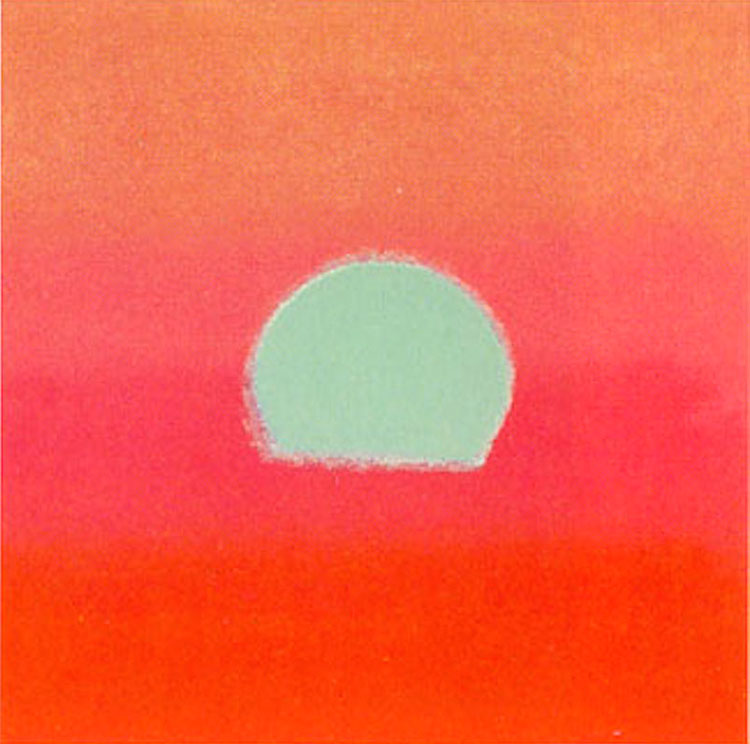 Andy Warhol’s Sunset, 1972 portfolios are beautiful color experiments featuring simple sunset imagery. Repeating the same image of a simple round sun slowly sinking into the horizon, Warhol printed this work in many color combinations. Warhol explored color theory throughout his career, putting contrasting colors against one another to create visually interesting combination. This is most likely an after effect of his artistic start in commercial design, when the goal is to catch someone’s eye off the street. Warhol strays from naturalistic colors in these prints, choosing instead otherworldly compositions. Sunset, 1972 FS II.86 features cyan blue sun sinking into a berry red horizon. The sky is an ombre of pinks to red and contrasts brilliantly with the blue of the sun.

This screenprint is part of a series of Sunset prints Warhol created in 1972. He printed hundreds of different versions with unique color combinations. Three other versions of this print are listed as Sunset FS II.85, Sunset FS II.87 and Sunset FS II.88.

Catalogue Raisonné & COA:
Andy Warhol Sunset, 1972 FS II.86 is fully documented and referenced in the below catalogue raisonnés and texts (copies will be enclosed as added documentation with the invoices that will accompany the sale of the work).

About the Framing:
Framed to museum-grade, conservation standards, Andy Warhol Sunset, 1972 FS II.86 is presented in a complementary moulding and finished with silk-wrapped mats and optical grade Plexiglas.