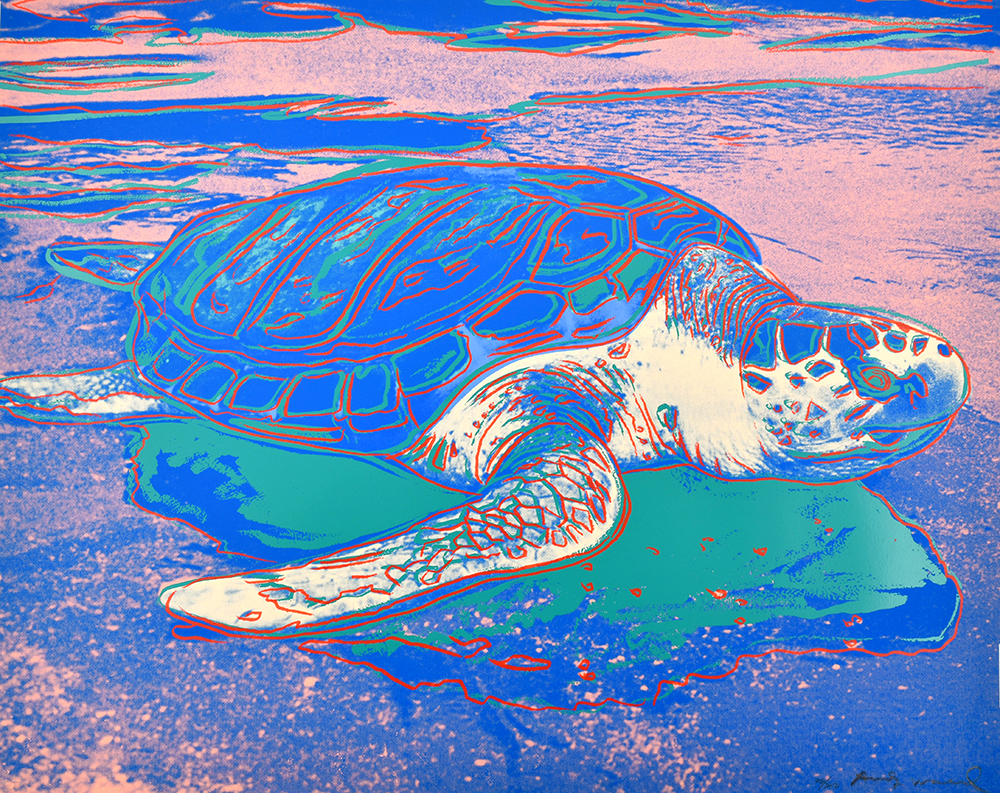 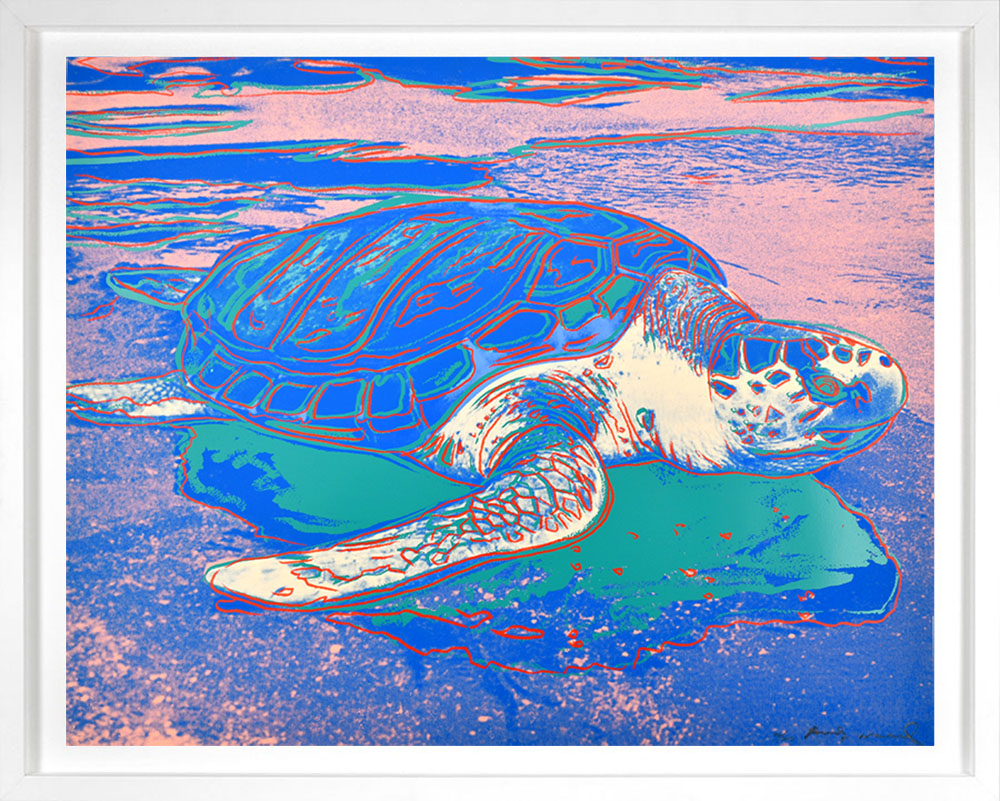 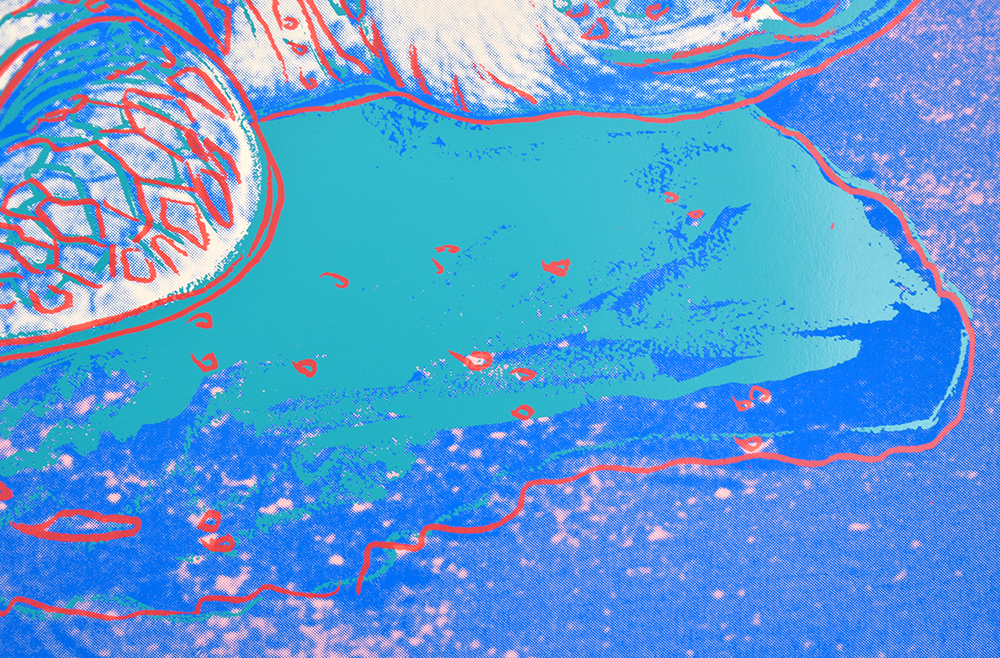 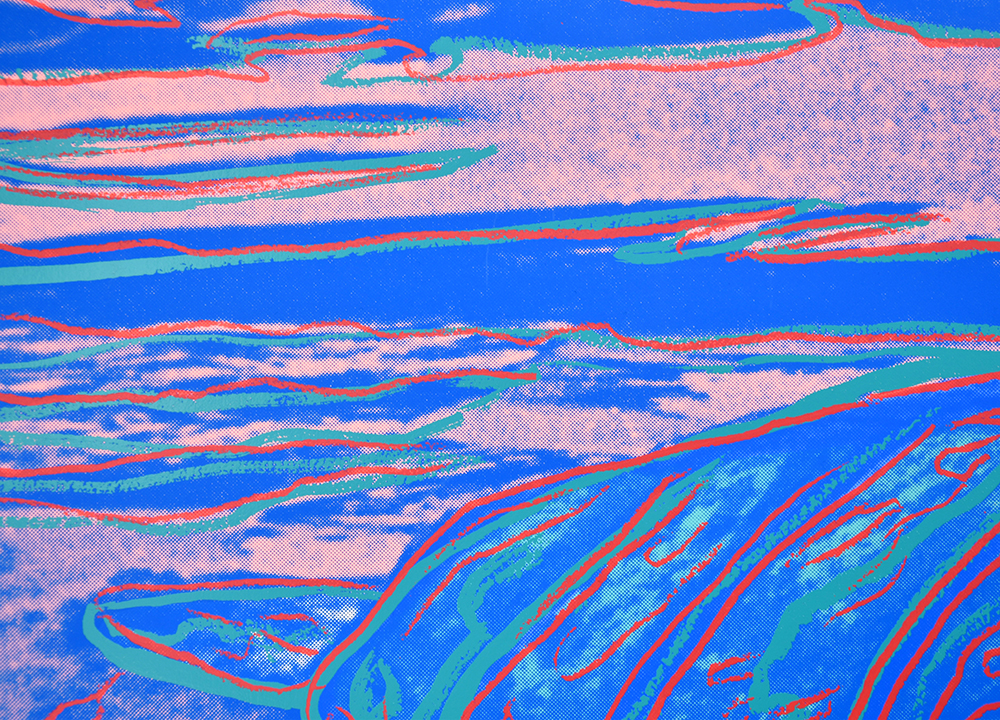 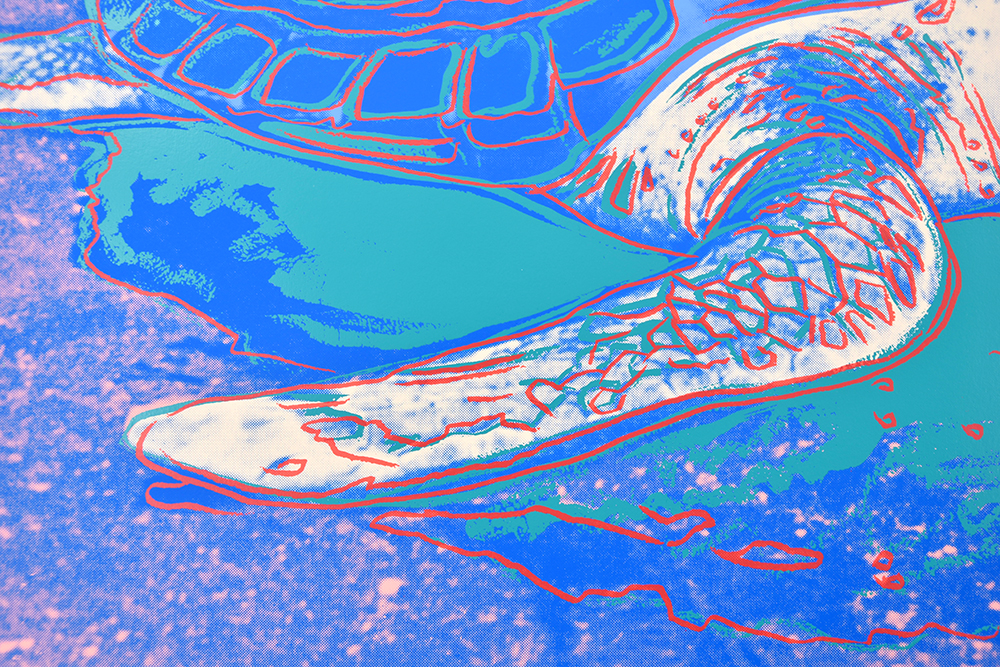 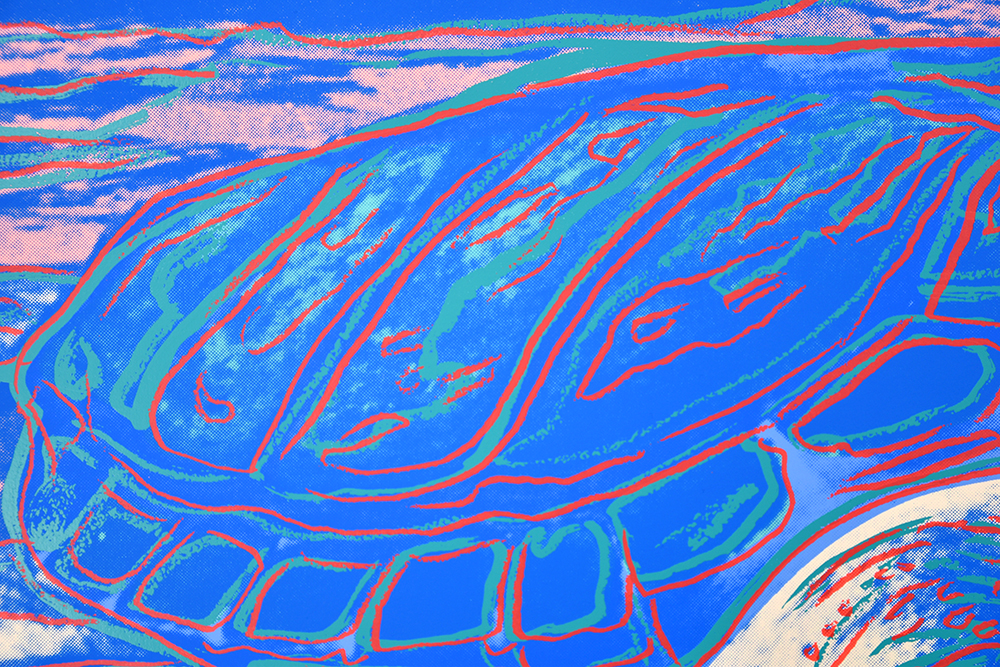 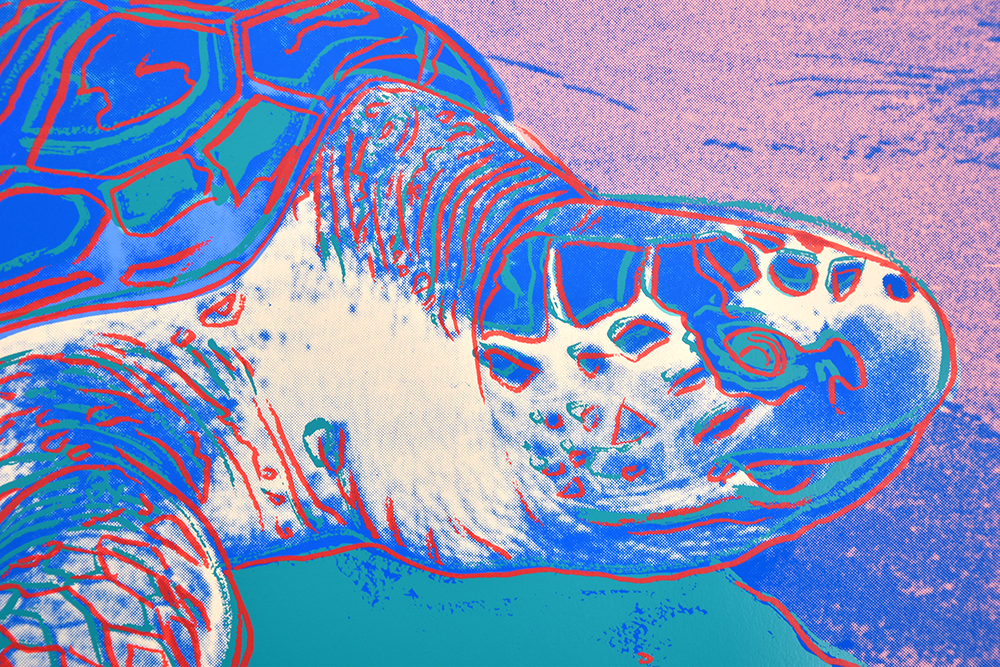 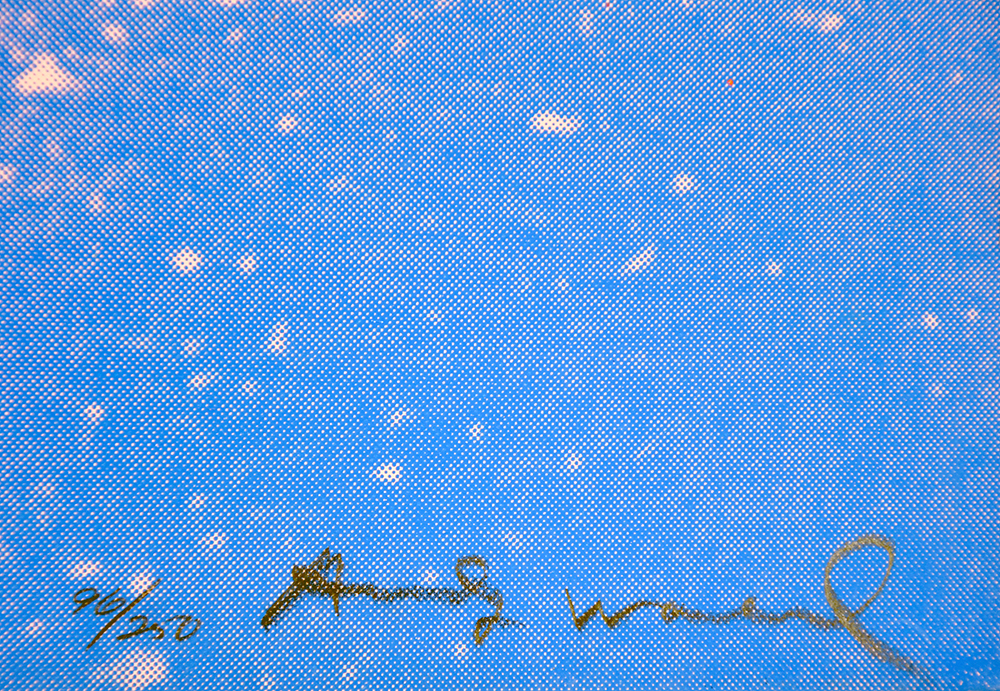 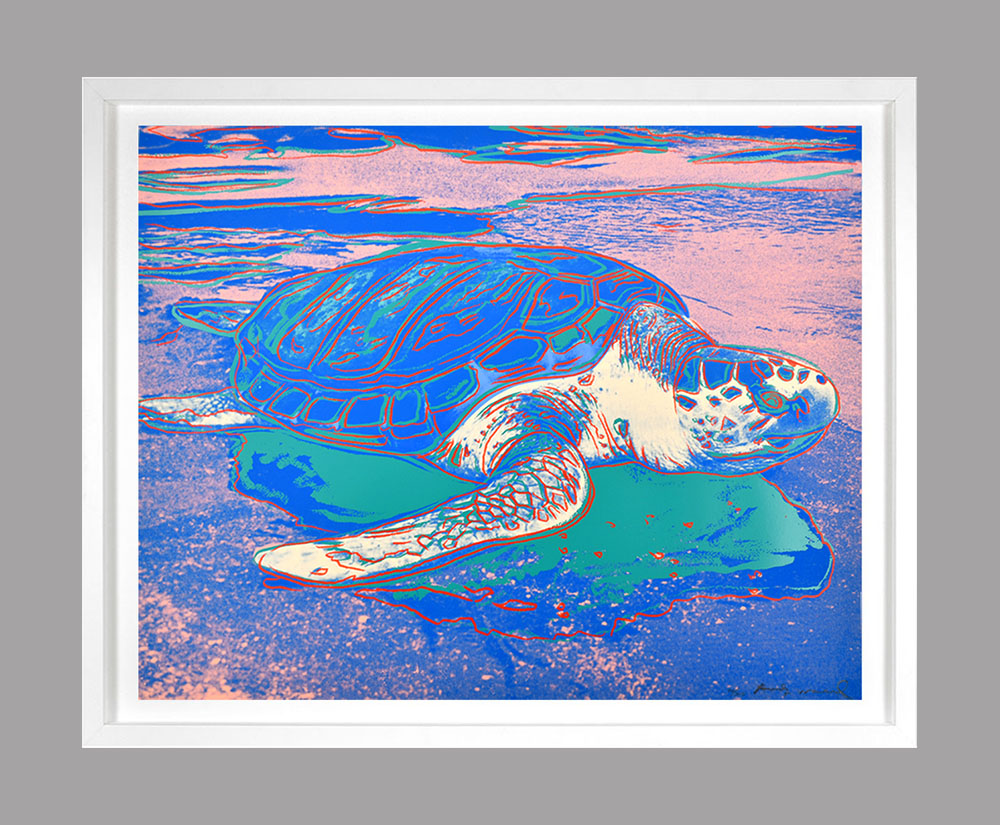 Andy Warhol Turtle, 1985 is a transformative portrait of a sea turtle in a palette of purples, pinks, and blues. The unusual color palette is striking and surreal, slightly halting the viewer’s ability to recognize the subject. Warhol utilized a photograph as his source to create this mesmerizing screenprint. While the saturated hues amplify the image, Warhol’s pop art style iconizes the turtle with intensity through his use of graphic outlines and commercial aesthetic.  While this artwork was not a part of a series, it was created two years following Andy Warhol’s famous and acclaimed Endangered Species Portfolio, addressing the artist’s concern for the preservation of wildlife. While it is likely that Warhol’s care for ecological issues informed his creation, Andy Warhol Turtle, 1985’s conception was promotional. This artwork was published to coincide with the 1985 film Turtle Diary written by Harold Pinter, a romantic comedy centered on sea turtles at the London zoo, and the individuals who seek to free them from captivity.

Created in 1985, Andy Warhol Turtle, 1985 is a color screenprint on Lenox Museum Board is hand signed by Andy Warhol (Pennsylvania, 1928 - New York, 1987) in pencil in lower right. Numbered from the edition of 250, 50 artist proofs, 10 printer's proofs, and 2 bon à tirer, this work was printed by Rupert Jasen Smith, New York and published by CBS, Inc., Los Angeles, California.

Catalogue Raisonné & COA:
Andy Warhol Turtle, 1985 is fully documented and referenced in the below catalogue raisonnés and texts (copies will be enclosed as added documentation with the invoices that will accompany the sale of the work).

About the Framing:
Framed to museum-grade, conservation standards, Andy Warhol Turtle, 1985 is presented in a complementary moulding and finished with mats and optical grade Plexiglas.