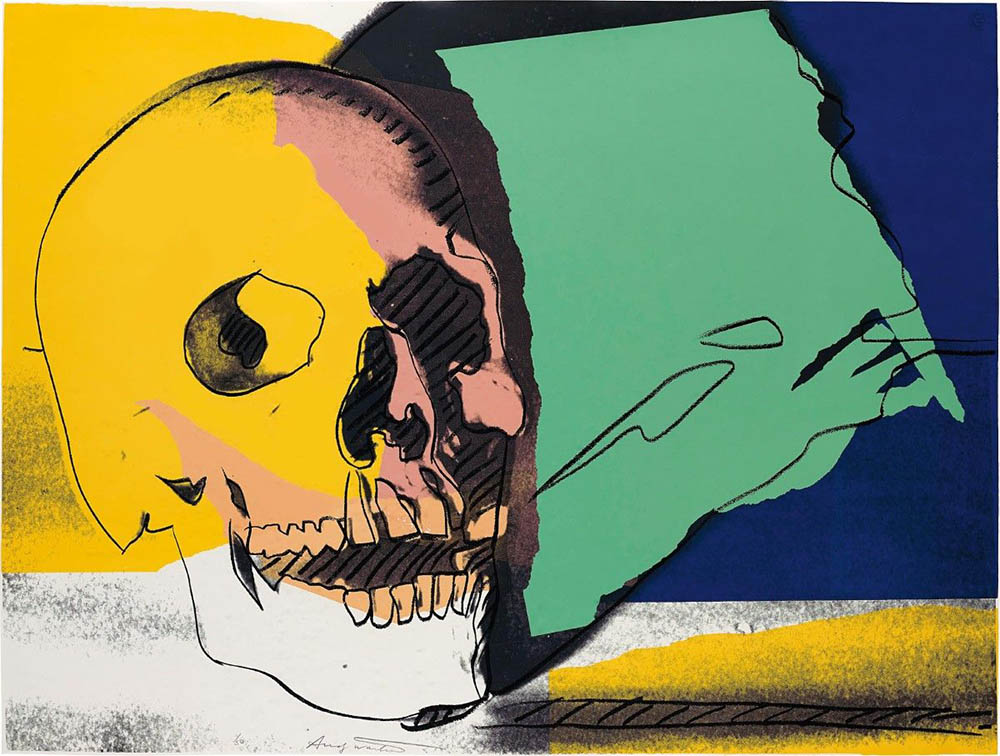 Andy Warhol Skulls, 1976 FS II.158 is one of four prints in the artist's Skulls series. It presents  a human skull with semi transparent layers of contrasting orange-y reds and muted green. Warhol created the prints from photographs his assistant took. Skulls throughout art history often represent 'memento mori' or symbols of death. They serve as a reminder of the shortness of life and that death is inevitable. After Warhol suffered life-threatening injuries from a shooting in 1968, the artist began to explore darker themes in his art than his previous subjects. His Skulls portfolio is an example of not only his thematic shift but also his constant practice and work in trying to better himself as an artist. In the prints, Warhol experiments and plays with how light hits the skulls and affects their shadows. Shadows, along with color and shape, were something Warhol was consistently fascinated with from an artistic standpoint throughout his career.

Created in 1976, this work is a screenprint on Strathmore Bristol paper, hand signed by Andy Warhol in pencil in the lower center.  Numbered from an edition of 50, aside from 10 Artist Proofs marked 'AP.'

Catalogue Raisonné & COA:
Andy Warhol Skulls, 1976 FS II.158 is fully documented and referenced in the below catalogue raisonné and texts (copies will be enclosed as added documentation with the invoices that will accompany the sale of the work).

1. Feldman, Frayda and Jörg Schellmann, A Catalogue Raisonne, 4th ed. Listed as catalogue raisonné no. II.158 on page 97.
2. A Certificate of Authenticity will accompany this artwork.

About the Framing:
Framed to museum-grade, conservation standards, Andy Warhol Skulls, 1976 FS II.158 is presented in a complementary moulding and finished with silk-wrapped mats and optical grade Plexiglas.