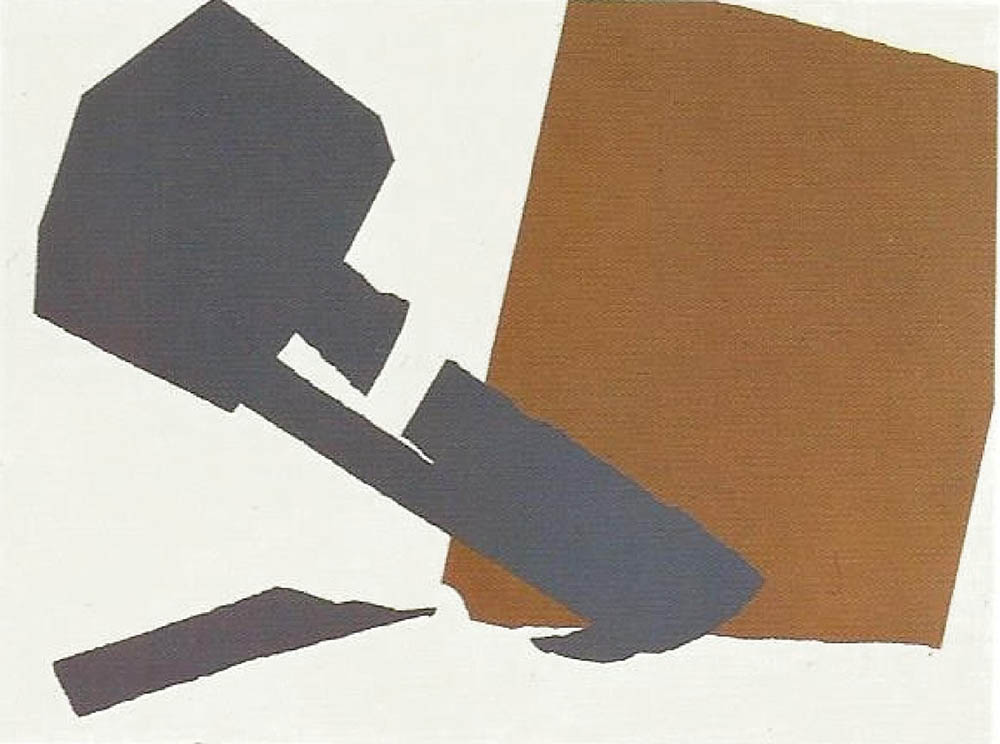 Andy Warhol Hammer and Sickle (Special Edition), 1977 FS II.166 is one of a portfolio of seven screenprints that illustrates the five separate colors of the printing progression of the print Hammer and Sickle, 1977 FS II.164. This is the second print in the special edition portfolio and it shows the second color that is printed, blocky shapes of charcoal gray that make up the shadows of the hammer and sickle. Warhol sought to deconstruct the communist symbol of hammer and sickle and separate the objects from any political or cultural ideologies. In this special edition portfolio, he deconstructs both objects even further, creating what end up being abstracted compositions that build to form a recognizable screenprint. Warhol was inspired to create prints of the  hammer and sickle after visiting Italy in 1976, where he witnessed the symbol as popular graffiti all over the country at the time. Warhol was not as interested in what the symbol represented, a wave of communist ideologies sweeping the nation in the late 70s, but was more intrigued by the repeated nature of the symbol and its place in pop culture, if it had one. Ronnie Cutrone, Warhol's studio assistant, created his own photographs for Warhol to work from, as he was unable to find suitable references for the artist. Warhol was able to replicate the iconic symbol of the hammer and sickle in unique ways in each of the prints. This special edition portfolio gives insight into Warhol's printing process and we are able to visually see the separate parts that make a whole.

Created in 1977, this work is a screenprint on Strathmore Bristol paper, hand signed by Andy Warhol in pencil in the lower left.  Numbered from an edition of 10.

Catalogue Raisonné & COA:
Andy Warhol Hammer and Sickle (Special Edition), 1977 FS II.166 is fully documented and referenced in the below catalogue raisonné and texts (copies will be enclosed as added documentation with the invoices that will accompany the sale of the work).

1. Feldman, Frayda and Jörg Schellmann, A Catalogue Raisonne, 4th ed. Listed as catalogue raisonné no. II.166 on page 99.
2. A Certificate of Authenticity will accompany this artwork.

About the Framing:
Framed to museum-grade, conservation standards, Andy Warhol Hammer and Sickle, 1977 FS II.166 is presented in a complementary moulding and finished with silk-wrapped mats and optical grade Plexiglas.