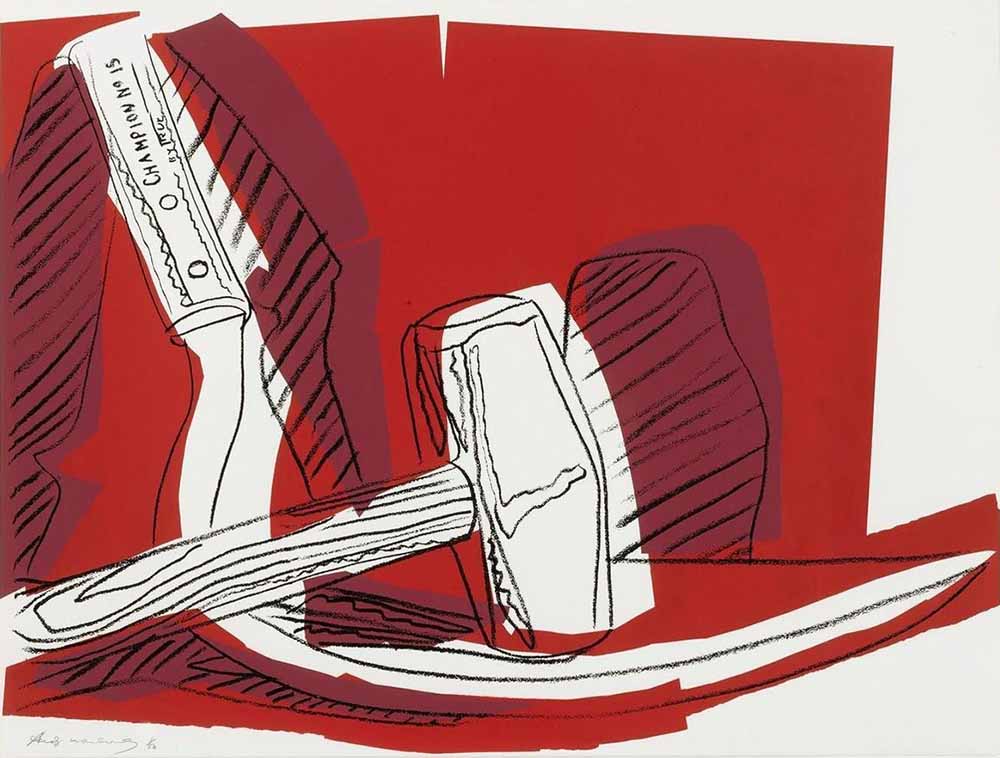 Andy Warhol Hammer and Sickle, 1977 FS II.162 is part of a portfolio of prints based off of photographs of a hammer and sickle taken by Warhol's studio assistant Ronnie Cutrone. Warhol was inspired by the communist symbol of the hammer and sickle after visiting Italy in 1976, where he witnessed the symbol as popular graffiti all over the country at the time. Warhol was not as interested in what the symbol represented, a wave of communist ideologies sweeping the nation in the late 70s, but was more intrigued by the repeated nature of the symbol and its place in pop culture, if it had one. Cutrone was unable to find suitable references for Warhol, finding nothing but flat and two-dimensional references from flags and other political materials. The assistant went out and bought a real hammer and sickle which he photographed himself. Warhol created this portfolio of screenprints based on the photos that Cutrone took, and was able to deconstruct the iconic symbol of the hammer and sickle in unique ways. Hammer and Sickle, 1977 FS II.162 shows the hammer draped across the sickle, both objects left white and blocked in by shades of red. Warhol's sketched line work is visibly overlaid over the scene, adding dimension and visual interest, a common Warhol technique in his screenprinting.

Catalogue Raisonné & COA:
Andy Warhol Hammer and Sickle, 1977 FS II.162 is fully documented and referenced in the below catalogue raisonné and texts (copies will be enclosed as added documentation with the invoices that will accompany the sale of the work).

1. Feldman, Frayda and Jörg Schellmann, A Catalogue Raisonne, 4th ed. Listed as catalogue raisonné no. II.162 on page 98.
2. A Certificate of Authenticity will accompany this artwork.

About the Framing:
Framed to museum-grade, conservation standards, Andy Warhol Hammer and Sickle, 1977 FS II.162 is presented in a complementary moulding and finished with silk-wrapped mats and optical grade Plexiglas.