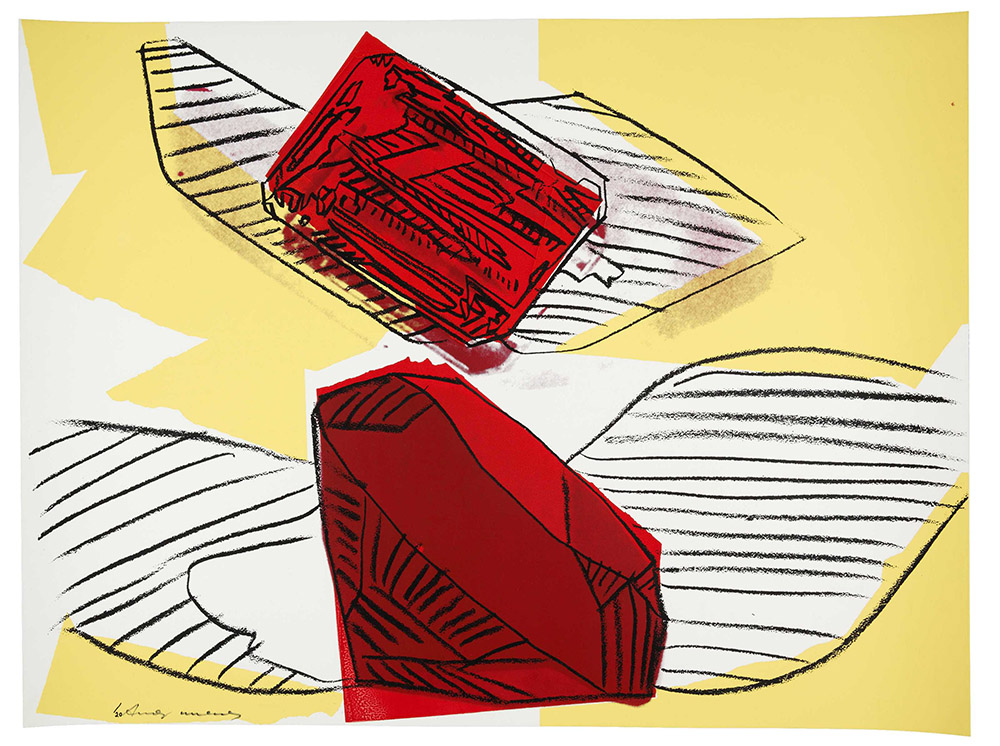 Andy Warhol Gems, 1978 FS II.187 features two rubies, one cut in a rectangular 'emerald' style, the other cut more like a classic diamond. The two gems are colored with deep rich reds, and have Warhol's hand-sketched linework outlining the shapes of the stones. Towards the end of his life, Warhol became a jewelry collector, and was longtime friends with Paloma Picasso, a career jewelry designer for Tiffany & Co. Warhol was known for his large circle of famous friends, from upper class socialites, to models and actors. Warhol's studio, dubbed The Factory,  was a hub for wild parties and celebrations. Flashy jewelry full of rare rubies, diamonds, emeralds were common accessories for people in these circles. Expensive jewelry is associated with status, class, and capitalism, an ostentatious display of wealth, so it makes perfect sense Warhol would be interested in this subject, as he often delved into the complexities of consumerism and celebrity in American culture throughout his career. In his Gems series, Warhol works to deconstruct the jewels and present them in abstract ways, through a close cropping of the composition to the simple flat colors he used.

Catalogue Raisonné & COA:
Andy Warhol Gems, 1978 FS II.187 is fully documented and referenced in the below catalogue raisonné and texts (copies will be enclosed as added documentation with the invoices that will accompany the sale of the work).

1. Feldman, Frayda and Jörg Schellmann, A Catalogue Raisonne, 4th ed. Listed as catalogue raisonné no. II.187 on page 103.
2. A Certificate of Authenticity will accompany this artwork.

About the Framing:
Framed to museum-grade, conservation standards, Andy WarholGems, 1978 FS II.187 is presented in a complementary moulding and finished with silk-wrapped mats and optical grade Plexiglas.