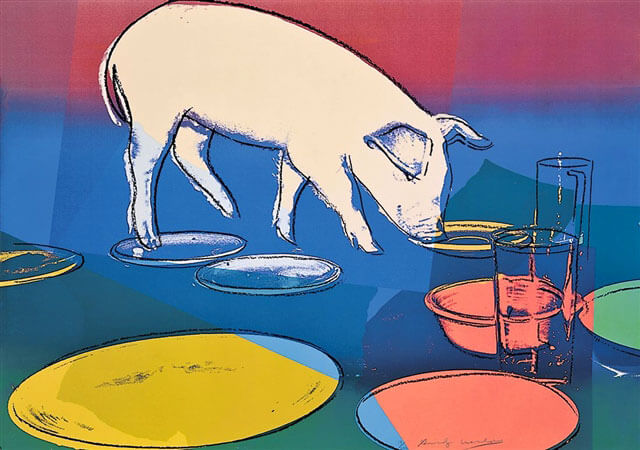 Commissioned by the publisher for the readers of Die Welt, a German newspaper, the curious Warhol screenprint Fiesta Pig, 1979 bestows a new meaning to the phrase "party animal." A pink pig appears as if entering a disco-lit party, its nose in a bowl of food. Perhaps one of Warhol's more difficult images to place, this piece is instilled with a sense of reckless fun. We witness glasses, bowls, and plates scattered about on the floor as a pig aimlessly wanders about. Each is colored differently, leading them to look almost like confetti plates. From the title, we can infer that the pig has perhaps entered the aftermath of a party so wild that its participants have not yet noticed the presence of their unanticipated guest - we can only imagine their surprise - would it be as difficult to place as our own when confronted with this piece?

Created in 1979, this original color screenprint was printed by Rupert Jasen Smith, New York and published by Axel Springer Verlag, Hamburg, Germany. This piece is hand-signed by Andy Warhol (Pennsylvania, 1928 - New York, 1987) in pencil in the lower right and numbered from the edition of 200; aside from the edition of 10 Artist's Proofs, 5 Printer's Proofs, 1 Hors Commerce.

Andy Warhol screenprint Fiesta Pig, 1979 is fully documented and referenced in the below catalogue raisonnés and texts (copies will be enclosed as added documentation with the invoices that will accompany the sale of the work).

ABOUT THE FRAMING:
Andy Warhol screenprint Fiesta Pig, 1979 is framed to museum-grade, conservation standards, presented in a complimentary moulding and finished with silk-wrapped mats and optical grade Plexiglas.