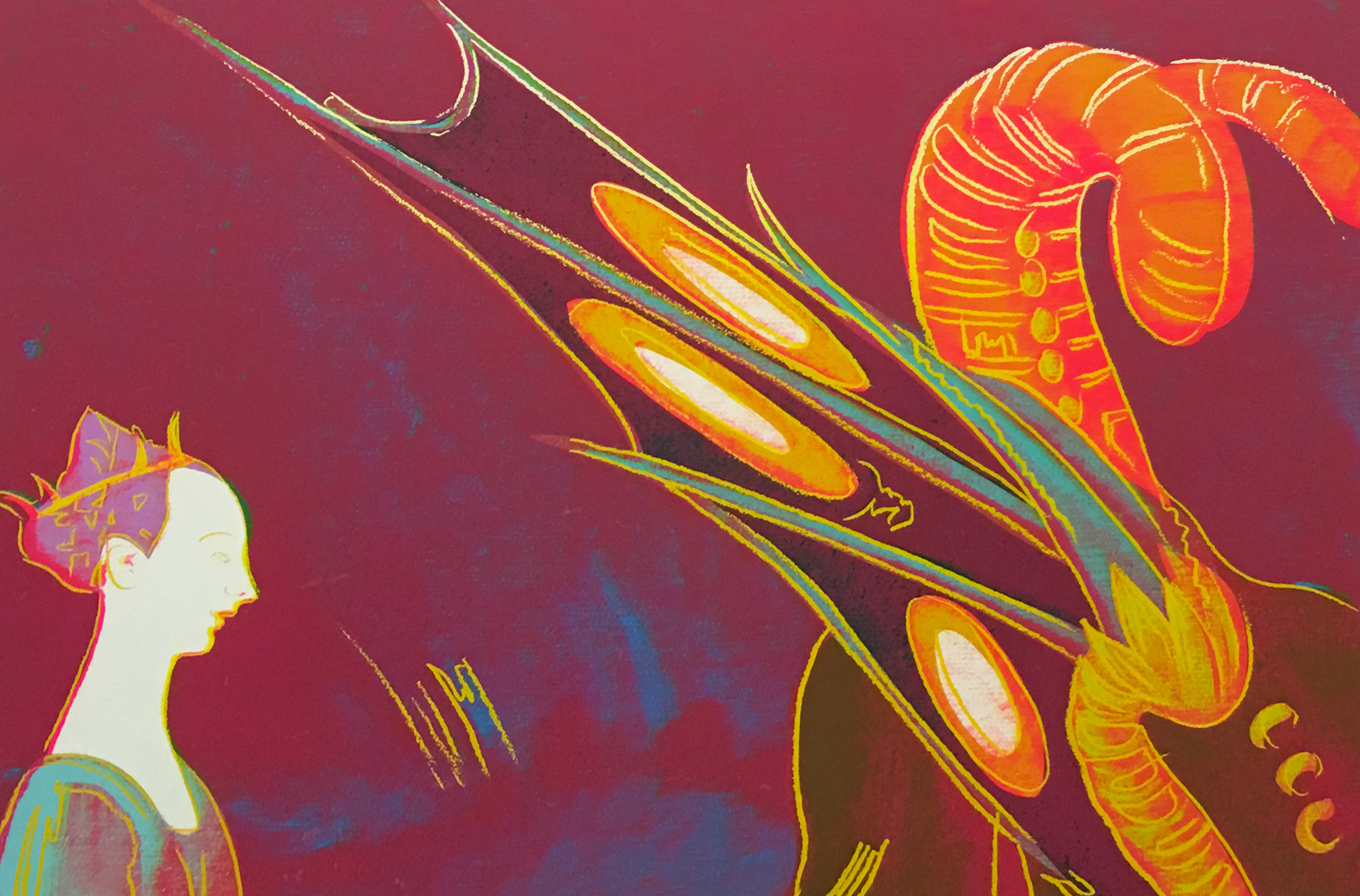 Details of Renaissance Paintings (Paolo Uccello, St. George and the Dragon, 1460), 1984 FS II.325 is a recreation of Paolo Uccello’s painting St. George and the Dragon, 1460. The original work is housed in the National Gallery in London, and follows the legend of St. George and his quest to slay a dragon that was demanding human sacrifices, in turn saving a princess. It's a tale from the Middle Ages, dating back to the 11th and 12th centuries, and was portrayed in paintings in many different time periods. Other Renaissance artists also depicted the legend, such as Donatello, Giovanni Bellini and Raphael. Warhol decided to crop the original composition, instead focussing in on the upper body of the princess and part of the dragon. This was something he did in all of the works in his Details of Renaissance Paintings series, and results in an unrecognizable and abstracted work at first glance. Warhol uses an unnatural color palette of maroons and reds to transform the traditional composition into a pop art-style work. Captivating and visually intriguing, this screenprint shows off Warhol’s artistry and skill in creating interesting compositions, and the cultural commentary that is present in nearly every work throughout his career.

This screenprint is part of a series of works Warhol createdin the 1980s modeled after famous Renaissance masterworks. Warhol was inspired by The Mona Lisa’s first exhibition in New York in 1963, and the ensuing chaos in the media. Warhol was fascinated by the American media and pop culture, and he was amused the intense attention the singular portrait gained. That same year, Warhol created his own version of the famous portrait and repeated Mona Lisa’s face 30 times, titling the work Thirty Are Better Than One. Warhol played with the concept of mass producing seemingly unique objects and revisited this idea to create the Details of Renaissance Paintings series in the 1980s.

Created in 1984, Andy Warhol Details of Renaissance Paintings (Paolo Uccello, St. George and the Dragon, 1460), 1984 FS II.325 is a screenprint on Arches Aquarelle (Cold Pressed) Paper. This work is hand-signed by Andy Warhol in pencil in the lower left. Numbered from the edition of 50, aside from 12 Artist Proofs marked 'AP,' 5 Printer's Proofs marked 'PP,' and 4 Hors Commerce marked 'HC.'

Andy Warhol Details of Renaissance Paintings (Paolo Uccello, St. George and the Dragon, 1460), 1984 FS II.325 is fully documented and referenced in the below catalogue raisonnés and texts (copies will be enclosed as added documentation with the invoices that will accompany the sale of the work).