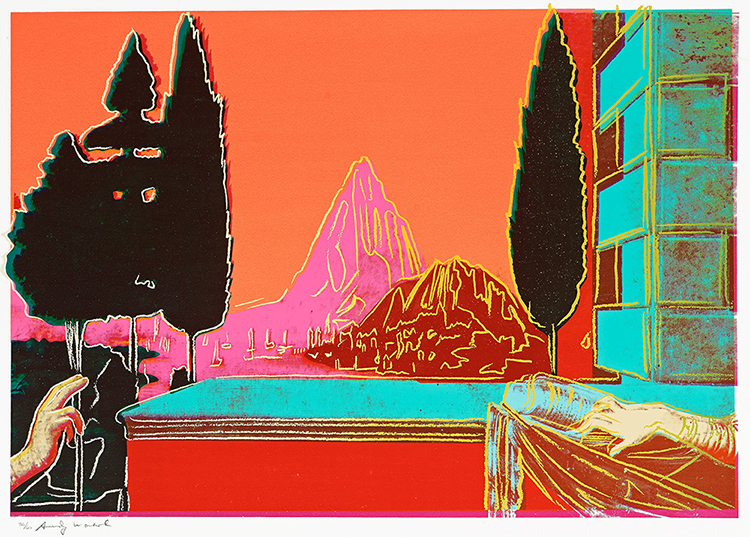 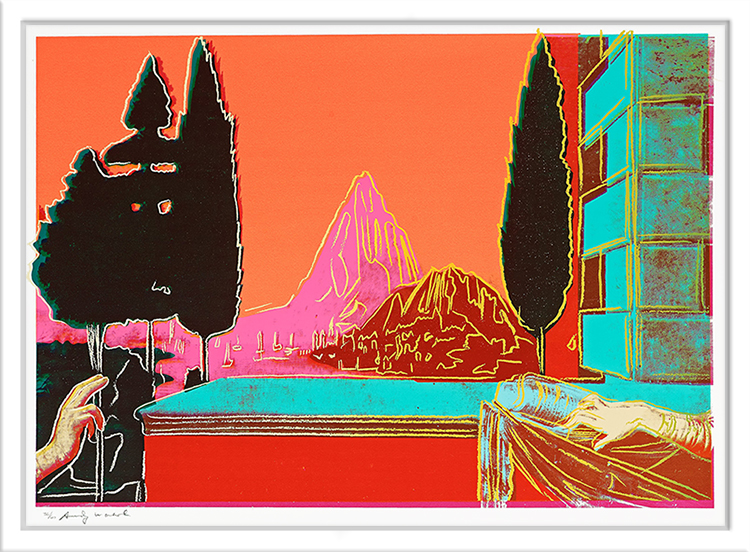 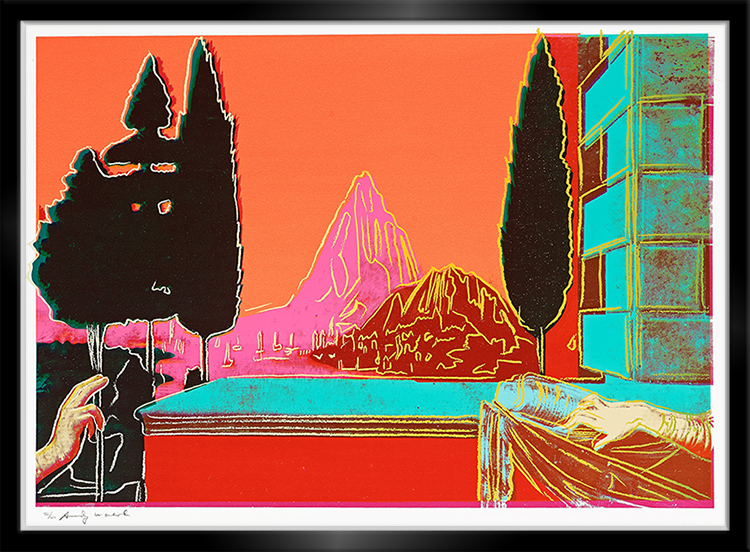 Details of Renaissance Paintings (Leonardo da Vinci, The Annunciation, 1472), 1984 is part of a series of works Warhol created after famous Renaissance masterworks in the 1980s. Warhol was inspired by The Mona Lisa’s first exhibition in New York in 1963, and the ensuing chaos in the media. Warhol was fascinated by the American media and pop culture, and he was amused the intense attention the singular portrait gained. That same year, Warhol created his own version of the famous portrait and repeated Mona Lisa’s face 30 times, titling the work Thirty Are Better Than One. Warhol played with the concept of mass producing seemingly unique objects and revisited this idea to create the Details of Renaissance Paintings series in the 1980s.

This screenprint is a pop art style recreation of Leonardo da Vinci’s The Annunciation, 1472. The original painting features a popular subject of the time, the story of the angel Gabriel announcing to the Virgin Mary that she would miraculously conceive and give birth to Jesus, an event known as “The Annunciation.” Da Vinci’s painting depicts Gabriel on the left side of the composition, kneeling to Mary, who is seated on the right side of the panel. Both figures are just outside of a house, with an otherworldly background behind them. Interestingly, Warhol chooses not to recreate the entire composition for his screenprints, a choice he makes for all of the works in this series. Instead, he zooms in and focuses on just the center of the work. In Warhol’s version, one can only just see Gabriel’s hand reaching out towards Mary from the bottom left corner, and Mary’s hand grazing the Bible she is reading from in the bottom right corner. Warhol uses bright, saturated contrasting colors of reds, pinks and blues to turn this work into an abstracted, pop-art version of a Renaissance masterpiece. Captivating and enigmatic, this screenprint shows off Warhol’s artistry and skill in creating interesting compositions, and the cultural commentary that is present in nearly every work throughout his career.

Catalogue Raisonné & COA:
Andy Warhol Details of Renaissance Paintings (Leonardo da Vinci, The Annunciation, 1472), 1984 is fully documented and referenced in the below catalogue raisonnés and texts (copies will be enclosed as added documentation with the invoices that will accompany the sale of the work).

About the Framing:
Framed to museum-grade, conservation standards, Andy Warhol Details of Renaissance Paintings (Leonardo da Vinci, The Annunciation, 1472), 1984 is presented in a complementary moulding and finished with silk-wrapped mats and optical grade Plexiglas.