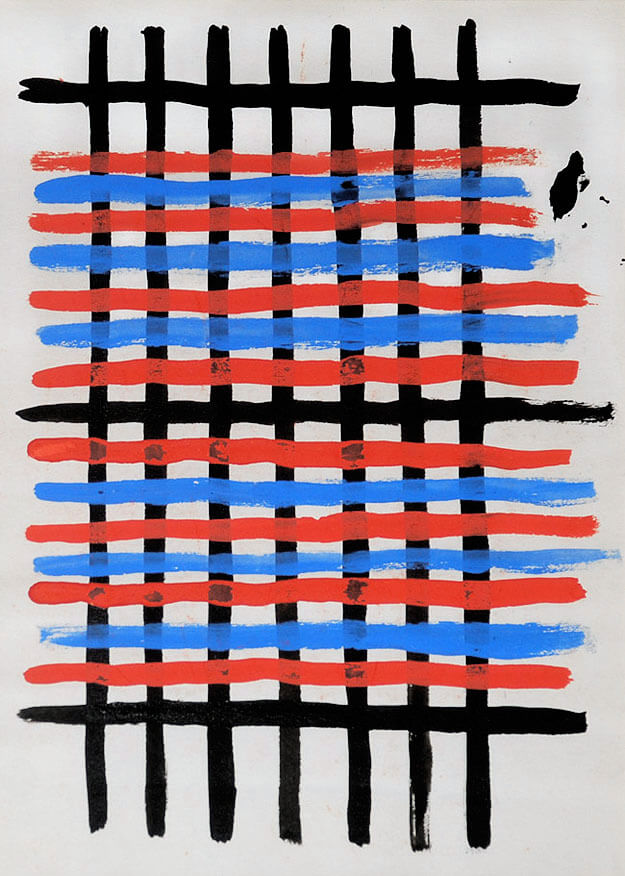 This unique piece is composed of a series of criss-crossed and overlapping vertical and horizontal lines. The bold, black vertical and horizontal lines create a pattern of vertical rectangles. However, with the addition of vibrant red and blue horizontals, a new series of patterns comes to play, composed of horizontal rectangles. This overlapping of varied forms appears as netting or fencing; it creates a barrier while allowing the viewer a glimpse beyond. Though the red and black lines were applied after the black ones, causing the colored lines to overlap the black ones, the black lines show through, relaying an almost three dimensional illusion, as if this criss-crossed form is popping out at the viewer.

Created in 1925, this work is a unique gouache on paper.

Authentication:
1. A Photo Certificate of Authenticity hand-signed by Jean Louis Delaunay, who has the sole moral right to authenticate works by Sonia Delaunay, accompanies this piece.

2. The authenticity of this piece has been confirmed by Richard Ross.

About the Framing:
Museum-grade conservation framed in a contemporary gold frame with silk mats and optical grade Plexiglas. The sleek, modern simplicity of the frame highlights the colorful, quilt-like patterns that appear within the work.

Sell your Sonia Delaunay fine art with us. We offer free evaluations. Learn more about selling with us.