Sell Russell Young artwork with us. We will research its value and popularity for you. 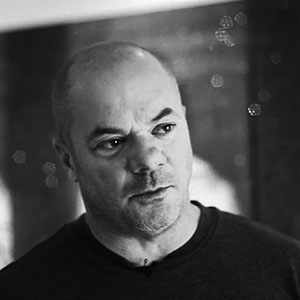 Born in 1959 in Northern England, Russell Young began his artistic career studying photography, film and graphic art at the Chester Art College. He was taken on as an assistant for Australian photographer Christos Raftopoulos, who met Young while he was living on the streets of London, homeless. The artist pursued his career in photography by immersing himself into British nightlife, in his own projects shooting live club shows of well-known musical artists such as R.E.M. and the Smiths. This exposure helped him to land work photographing for magazines, album covers, and portraits of famous artists and celebrities such as Morrissey, Bjork, Springsteen, Dylan, New Order, and Diana Ross. With his presence firmly grounded in the entertainment industry, quite fittingly Russell Young found himself directing music videos during the MTV boom. Despite his ties to pop culture and the mass market, Young would take extended breaks from directing to tend to his pastime of painting. Eventually his hectic lifestyle as an editorial photographer and music video director could no longer fulfill his creative aspirations as it once had, deciding to pursue painting and transition into a fulltime career as a fine artist.

As a painter, Russell Young is known for his portraits of iconic figures, the recurring subject across his oeuvre. Focusing on these celebrated idols for their impact on society and culture, his recognizable images are often compared to that of pop artist, Andy Warhol. His recent work consists of combining painting and photography to achieve stunning results, including his notable and frequent use of Diamond Dust, individually applied crystals that are pressed into the surface of his artworks, creating a mesmerizing effect that makes each piece unique. This remarkable technique produces beautiful images, but is not done so without conceptual purpose. By combining haunting imagery with luxurious material Young believes he can glamorize any image, while seducing the viewer to have a push and pull effect.

Russell Young currently lives and works in California and Brooklyn. Having been featured in galleries nationwide, including notable fine art capitals London, Paris, Berlin, Tokyo, Singapore, New York, Detroit, Miami and Los Angeles, his pieces have graced the auction block at Sotheby’s, Christie’s, and Phillips in both the United States and the UK. Noteworthy collections include Barack Obama, Brad Pitt, David Bowie, Aby Rosen, and more, Russell Young is one of the most desired, sought-after working artists of today.