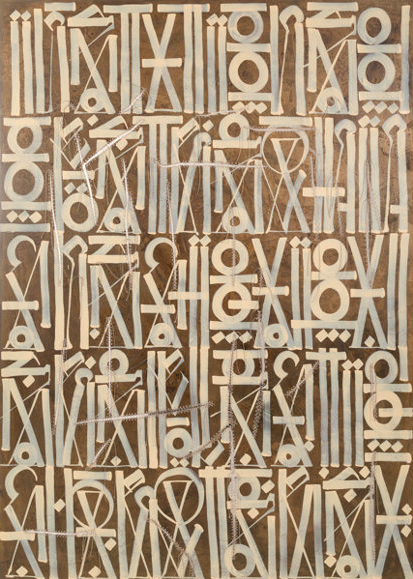 RETNA Untitled, 2014 features a limited palette of beige script against a brown background. Subtle variations in the shades of brown give the work a multilayered dimensional quality that accentuates the artist’s distinct stylized form of script RETNA is known for. The script covers the entirety of the canvas and is derived from a multitude of Gothic script, Egyptian Hieroglyphics and Arabic calligraphy. The methodical arrangement of stylized circles, lines and dots in various sizes overlap and interact with one another to create a linguistic composition in a somewhat chaotic yet organized configuration. Executed in earth tones, the color scheme gives this work a unifying and down to earth appearance. The painterly brushstrokes of the script vary slightly in transparency and distinctly define the noteworthy and exclusive style that give RETNA’s work a rustic and wholesome energy. The piece is executed in a graffiti-like manner, reminiscent of the Los Angeles art that originally brought RETNA to international attention and bolstering his standing as an influential contributor to contemporary art.

RETNA Untitled, 2014 is a unique and original acrylic on canvas. This work is hand signed by RETNA (Los Angeles 1979 - ) on verso.

Catalogue Raisonné & COA:
RETNA Untitled, 2014 is fully documented and referenced in the below catalogue raisonné and texts (copies will be enclosed as added documentation with the invoices that will accompany the sale of the work).

About the Framing:
Framed to museum-grade, conservation standards RETNA Untitled, n.d. presented in a complementary moulding and finished with silk-wrapped mats.