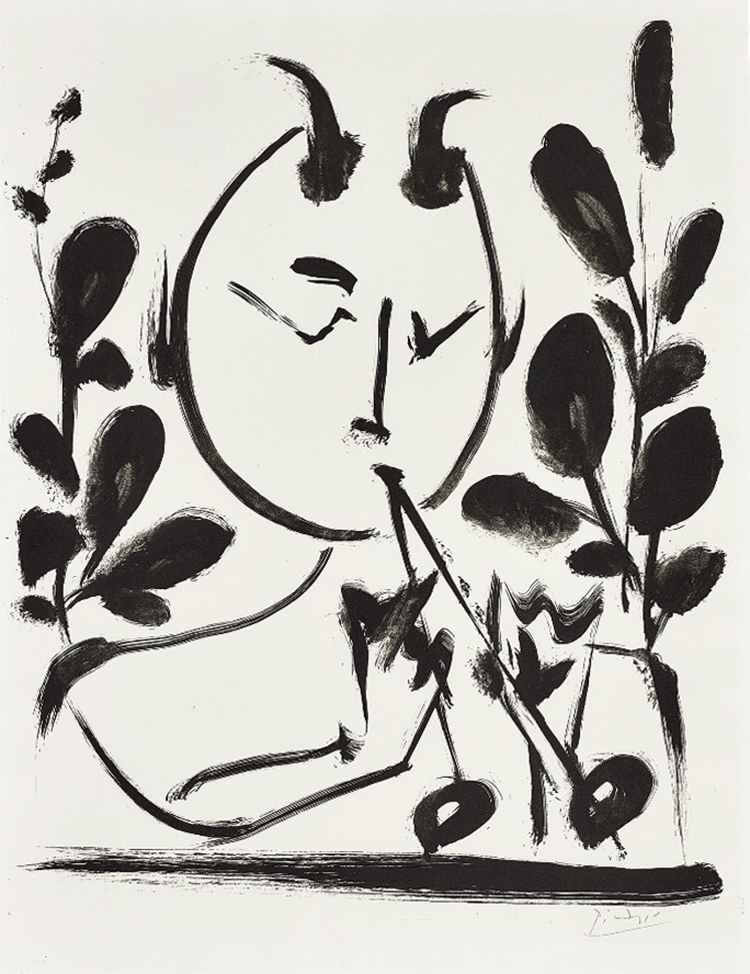 Pablo Picasso Faune aux Branchages (Faun with Branches), 1948 is an excellent example of Picasso's work in lithography. The composition features a faun, a  mythological half human–half goat creature appearing in Roman mythology, a figure similar to Greek mythology's satyr, playing an instrument surrounded by foliage. Picasso was inspired throughout his career by ancient Greek and Roman art and mythology. In his ceramic projects, the artist experimented with similar imagery found in black and red figure pottery in ancient Greek art. Fauns and satyrs are most often associated with leisure and revelry activities, like drinking, dancing and music. They are usually depicted with musical instruments or glasses of wine in forest settings. Fauns were thought to inspire fear in men traveling alone through remote and wild places. Picasso was influenced by cultural traditions and stories from around the world, from his own Spanish tradition of bullfighting to many Greek myths.

Faun aux Branchages (Faun with Branches), 1948 showcases Picasso's mastery of line and shape. A simple print with no shading, this work creates a full and robust scene using only a few artistic elements. The faun is deconstructed into a simple geometric figure, a hallmark of Picasso's famous art style. The leaves of the branches surrounding the faun balance out the composition and create balance, making this print incredibly pleasing to the eye of the viewer.

Catalogue Raisonné & COA:
Pablo Picasso Faune aux Branchages (Faun with Branches), 1948 is fully documented and referenced in the below catalogue raisonnés and texts (copies will be enclosed as added documentation with the invoices that will accompany the sale of the work).

About the Framing:
Framed to museum-grade, conservation standards, Pablo Picasso Faune aux Branchages (Faun with Branches), 1948 is presented in a complementary moulding and finished with silk-wrapped mats and optical grade Plexiglas.