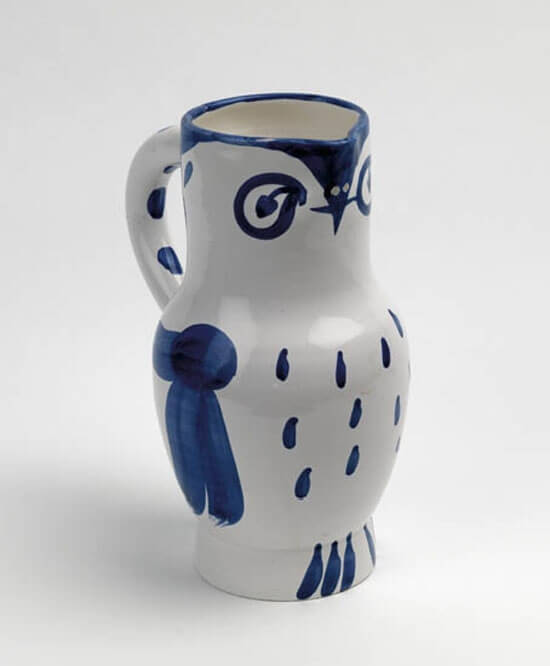 One of Picasso's more inspiring design choices, this pitcher of white earthenware clay is of an owl. Outlined in a vibrant blue that poetically reflects the gentleness of the creature, the owl is positioned straight forward with gazing eyes. A symbol of wisdom and change, the owl is revered in multiple cultures for its graceful flight and all-knowing gaze. Picasso's love of birds is well known, and he owned as owl himself as Francoise Gilot reflected in her memoir Life with Picasso:

"Pablo loved to surround himself with birds and animals. In general they were exempt from the suspicion with which he regarded his other friends. While Pablo was still working at the Musée d'Antibes, Sima had come to us one day with a little owl he had found in a corner of the museum. One of his claws had been injured. We bandaged it and gradually it healed. We bought a cage for him and when we returned to Paris we brought him back with us and put him in the kitchen with the canaries, the pigeons, and the turtledoves… Every time the owl snorted at Pablo he would shout, "Cochon, Merde" and a few other obscenities, just to show the owl that he was even worse mannered than he was. He used to stick his fingers between the bars of the cage and the owl would bite him, but Pablo's fingers, though small, were tough and the owl didn't hut him Finally the owl would let him scratch his head and gradually he came to perch on his finger instead of biting it.."

Created in 1954, this work is constructed from white earthenware clay, with oxide decoration on white enamel with blue. From the edition of 500, this work contains guaranteed authentic 'Madoura Plein Feu' and 'Empreinte Originale de Picasso' stamps on the bottom of the base. Written into the glaze is also the text, 'Edition Picasso Madoura' in black.

Catalogue Raisonné & COA:
Pablo Picasso Hibou (Owl), 1954 is fully documented and referenced in the catalogue raisonnès below (copies will be enclosed as added documentation with the invoice accompanying the final sale of this work).

1. Ramié, Alain. Picasso Catalogue of the edited ceramic works 1947-1971. Madoura: Galerie Madoura, 1988. Listed and illustrated as catalogue raisonné no. 253 on pg. 133.
2. A Certificate of Authenticity will accompany this work.