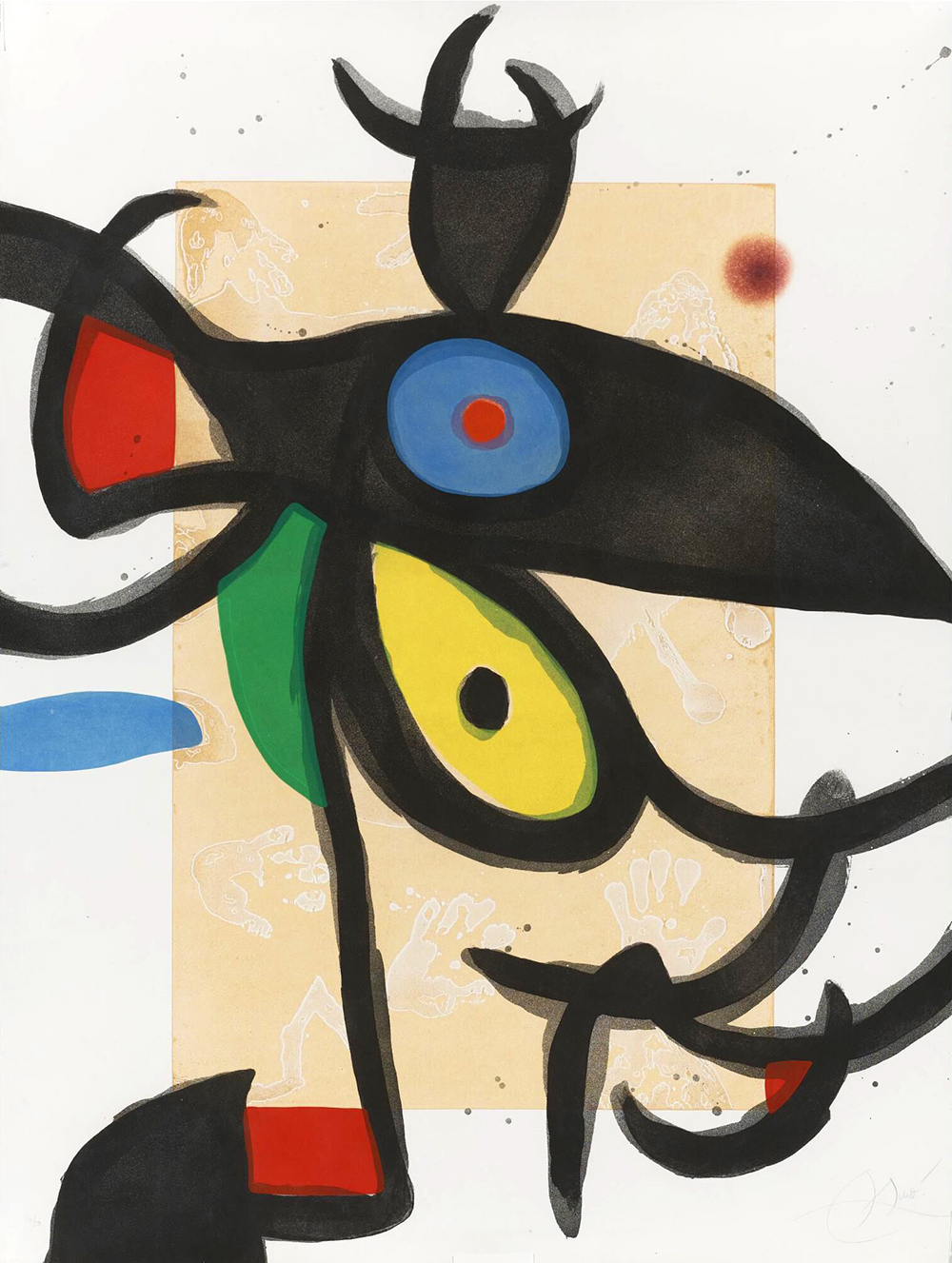 Joan Miró Inceste au Sahara (Incest in the Sahara), 1975 is a fascinating etching and aquatint featuring Miró’s famous thick black line abstract figures. The sprawling design constructed of loops, shapes and lines extends past the confines of the paper, creating a sense of unsuccessful containment, as if the work cannot be limited to its medium. Miró used his favored palette of primary colors, red, blue, yellow, along with a pop of green, in this work to fill in spaces created by the thick black lines. What is especially interesting about this composition is the vertical rectangle that sits behind the main design. Miró chose a muted pale reddish pink color as the base, a color not often seen in Miró etchings. There are tiny white handprints placed in various places on the rectangle.

This specific piece of visual information, the possibility of child-sized handprints, coupled with the etching’s harrowing title, Inceste au Sahara (Incest in the Sahara), leads to many questions. Miró was thought to be inspired and influenced by French philosopher Georges Bataille throughout his career. Bataille is known today for his work exploring erotism, mysticism, surrealism, and transgression. In his work concerning erotism, he delved heavily into the relationship between violence and erotism. “Bataille continued pursuing this violently erotic narrative throughout the 1930s and 1940s, mainly through his novels Madame Edwarda (1941), Le Bleu du Ciel (written in 1935, published in 1957, and which Miró owned), and L’Abbe C (1950).” In 1957, Bataille published L’Erotisme (Eroticism) which “covers prehistory to the contemporary through such varied topics as menstruation, murder, the Marquis de Sade, religious sacrifice, prostitution, the Kinsey Reports, and incest.” (Thornton-Cronin, 202-203). During Miró’s life, the artist witnessed his country fall into civil war (Spanish Civil War, 1936 – 1939), and much of his work explores relationships between death, war, and sexuality. Inceste au Sahara seems to be a later meditation on these same themes.

Catalogue Raisonné & COA:
Joan Miró Inceste au Sahara (Incest in the Sahara), 1975 is fully documented and referenced in the below catalogue raisonnés and texts (copies will be enclosed as added documentation with the invoices that will accompany the sale of the work).

About the Framing:
Framed to museum-grade, conservation standards, Joan Miró Inceste au Sahara (Incest in the Sahara), 1975, is presented in a complementary moulding and finished with silk-wrapped mats and optical grade Plexiglas.