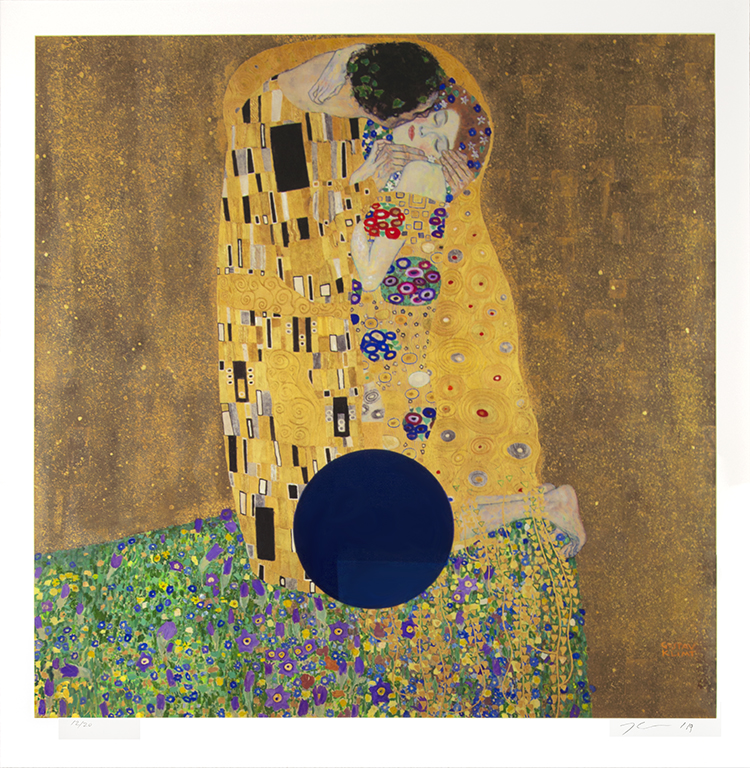 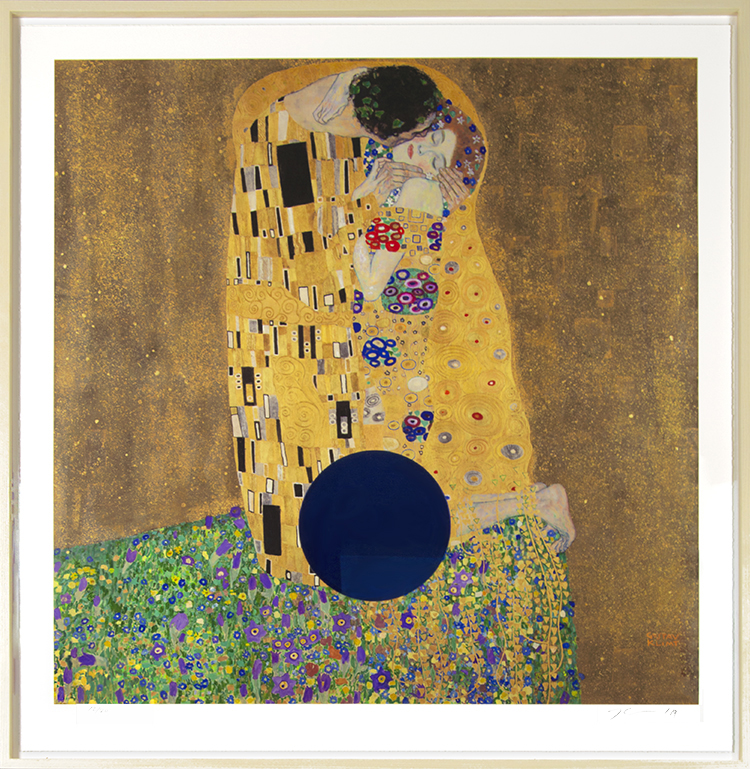 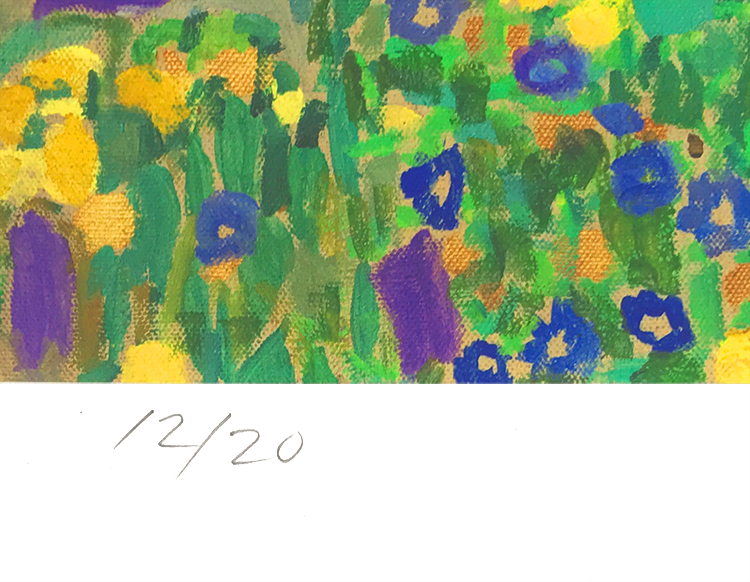 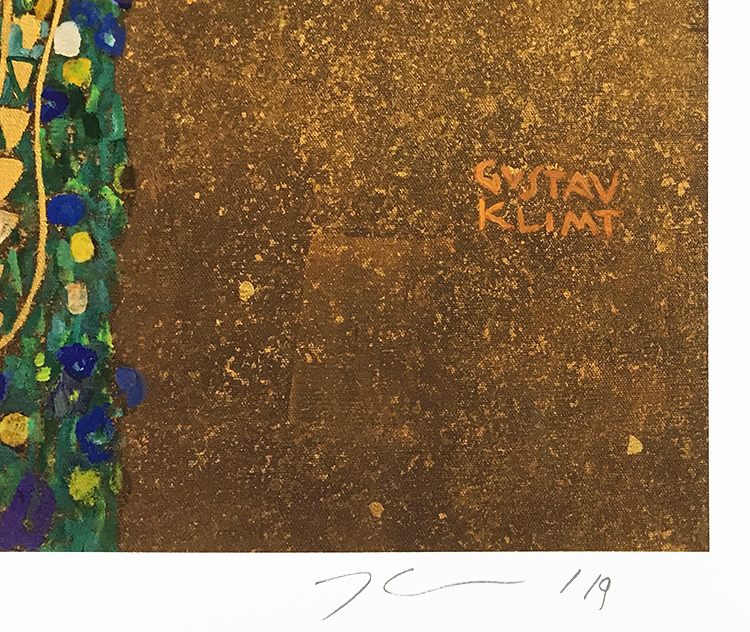 In 2015, American artist Jeff Koons debuted his show of 35 paintings, titled Gazing Ball, at the Gagosian gallery in New York. This show would be the beginning of Koons’ experimentation with his ‘Gazing Ball’ theme in relation to paintings. Two years prior, in 2013, Koons exhibited a similar concept but with recognizable statues and sculptures. This 2015 show featured 35 recreated masterpieces from different parts of art history, including works from artists like Eduoard Manet, Titian, El Greco, and Rembrandt. The appropriated paintings were repainted in oil paint, and a small shelf was seamlessly added to the canvas, in a spot that seemed natural to each painting. On this shelf, Koons placed a large blue glass ball, dubbed the “Gazing Ball.” Gazing balls originated in the 13th century in Venice, Italy, and were hand-blown by skilled craftsmen. They are usually placed in gardens as decoration, and some believed they warded off evil spirits and energy. King Ludwig II of Bavaria was known to enjoy the glass baubles and placed them all over his palace grounds.

For Koons, the reflective blue gazing ball represents the idea of participation - how viewers today interact with the masterpieces of art history. In his press conference about the show, Koons says the gazing ball “represents the vastness of the universe and at the same time the intimacy of right here, right now.” The gazing ball invites the viewer to think about their own relationship to the artworks and the role the viewer plays in art throughout history. By placing these mirrored balls in front of hugely famous artworks, Koons changes the viewer’s focus from the work itself to a more introspective perspective. Not only is it an incredible feat of talent and skill to create such beautiful renditions of these masterpieces from all periods of history, but Koons is able to invite the viewer to participate in these works like never before. By seeing yourself reflected in the blue mirrored surface, you are able to feel the presence of all of the people throughout history who have stood exactly where you are standing, looking at this same artwork. That in itself evokes the feeling of being a part of the painting’s history, emphasizing that its history is still continuing on today.

In 2019, Koons created incredible prints of his 2015 “Gazing Ball” paintings. Gazing Ball (Klimt Kiss), 2019 is a modern take on Gustav Klimt’s renowned 1907-1908 painting “The Kiss.” Koons’ version reinvigorates the legacy of another great artist in history; he utilizes the same composition as the original painting, with two figures engaging in a gentle embrace in the center of the work. The archival pigment print mimics exactly the ornate, decorative style associated with Klimt’s work. However, Koons appropriation is, as he notes, “not about being a copy, this is about this union, the concept of participating.” The reflection of the viewer in the gazing ball engages the viewer and quite literally takes them into the work itself. Instead of gazing upon the intimacy of the moment that Klimt created, Koons’ audiences gaze upon themselves and are left to ponder their role as a viewer.

Klimt’s The Kiss is an iconic painting often associated with the Art Nouveau and Arts & Crafts movements of the early 20th century. Neither movement focuses solely on fine art, such as painting. Instead both international movements were centered around styles of architecture, applied art, and most notably decorative art, such as furniture, jewelry, and interior design. Klimt’s The Kiss features many of the hallmarks of the Art Nouveau style, from the gold leaf and asymmetrical composition to the romantic subject and organic textile patterns. The prints of the loving couple’s clothes and the two-dimensional background are full of the organic and swirling forms that both movements are known for, modeled after plants and flowers. Klimt was inspired to use gold in his work from a visit to Ravenna, Italy, in 1903, where he saw Byzantine mosaics for the first time and was interested in how the flatness of the compositions allowed the goldwork to be the focus. Klimt used both gold and the two-dimensional flattening of figures in The Kiss to portray deep passion, love and affection in the couple’s embrace.

Koons’ decision to include Klimt’s The Kiss in his “Gazing Ball” series makes sense when looking at the entirety of the other masterpieces included in his show. Koons clearly meant to hit important periods of art history: Academic and history painting, Rococo, Neoclassicism, Renaissance, Fauvism, Impressionism, etc. The Kiss is the poster child for Art Nouveau, an important artistic response to the strict academic paintings of the 19th century that would open up artistic styles for future artists, allowing for the free experimentation in art that would happen throughout the 20th century. Koons’ gazing ball puts the viewer right in the center of this work’s historical narrative, and the combination makes for an engaging and unique experience.

Created in 2019, this archival Pigment Print on Innova rag paper with glass is hand-signed by Jeff Koons (York, Pennsylvania, 1955 - ) on recto and numbered from the edition of 20.

Catalogue Raisonné & COA:
Jeff Koons Klimt Kiss Gazing Ball, 2019 is fully documented and referenced in the below catalogue raisonnés and texts (copies will be enclosed as added documentation with the invoices that will accompany the sale of the work).

About the Framing:
Framed to museum-grade, conservation standards, Jeff Koons Klimt Kiss Gazing Ball, 2019 is presented in a complementary moulding.