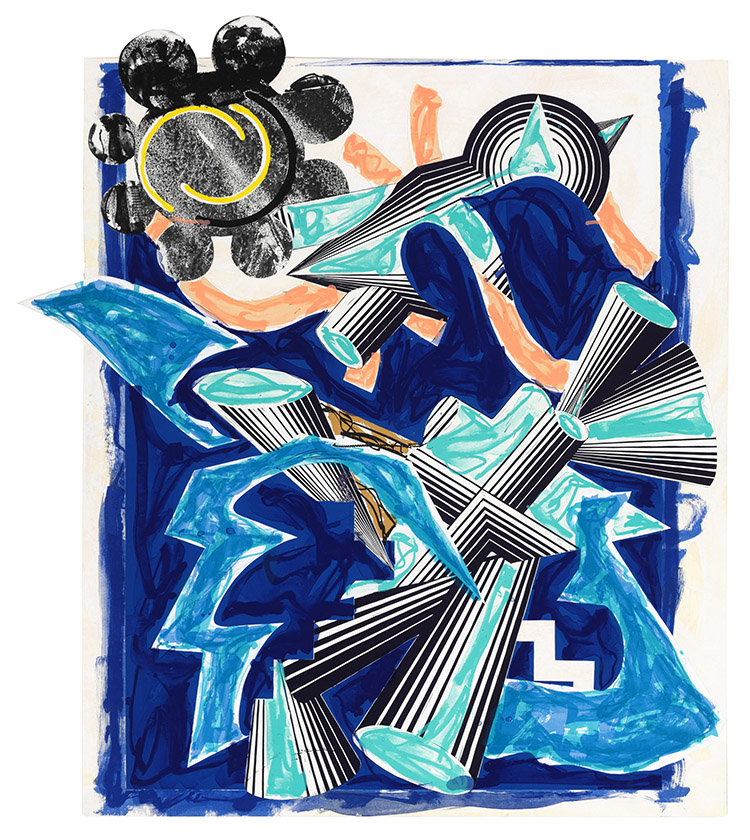 Frank Stella Had Gadya: Back Cover, 1984 is the final installment in the artist’s Illustrations After El Lissitsky’s Had Gadya Series. This work recalls the post-painterly abstraction known to have influenced Stella with added elements that reflect collage and cut-out effects. Inspired after seeing an exhibition in 1919 by the Russian avant-garde artist El Lissitzky who had created a series of gouaches illustrating the traditional Jewish Passover song, Had Gadya (The Only Kid), Stella created this series. This work is composed of several shapes that mimic the ones that appear in the artist’s Cones and Pillars paintings in complementary shades of blue and yellow. In some cases, these shapes extend beyond the confines of the standard rectangular composition, creating an overall shape that is pleasing to the eye.

Frank Stella Had Gadya: Back Cover is fully documented and referenced in the below catalogue raisonnés and texts (copies will be enclosed as added documentation with the invoices that will accompany the sale of the work).

Framed to museum-grade, conservation standards, Frank Stella Had Gadya: Back Cover, from Illustrations after El Lissitzky’s Had Gadya, 1984 is presented in a complementary moulding and finished with silk-wrapped mats and optical grade Plexiglas.