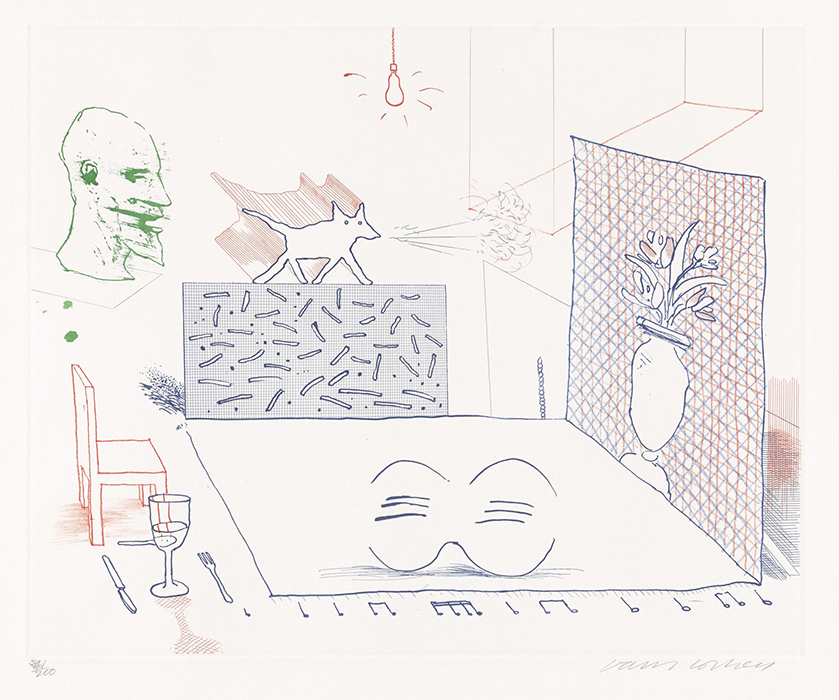 David Hockney Discord Merely Magnifies, 7, from The Blue Guitar, 1976-1977 presents a surreal scene of a room with a rug, a chair, a bare lightbulb, and some dinnerware. These commonplace objects take on a playful and dream-like quality as they float away from each other, break apart, and defy perspective. The scene is made further curious by a floating green head at the upper left, and the cartoonish form of a cat walking along a wall and casting a dragging red shadow. At the foreground, the fringe of the floor rug dissolves into neatly arranged musical notes. On the rug, appropriately, is the abstracted silhouette of a guitar, alluding to the title of the series and the poem which inspired Hockney to create these works: “The Man with the Blue Guitar” by Wallace Stevens. The work is infinitely captivating, exemplifying Hockney’s unique playful style.

Catalogue Raisonné & COA:
David Hockney Discord Merely Magnifies, 7, from The Blue Guitar, 1976-1977 is fully documented and referenced in the below catalogue raisonnés and texts (copies will be enclosed as added documentation with the invoices that will accompany the sale of the work).

About the Framing:
Framed to museum-grade, conservation standards, David Hockney Discord Merely Magnifies, 7, from The Blue Guitar, 1976-1977 is presented in a complementary moulding and finished with silk-wrapped mats and optical grade Plexiglas.