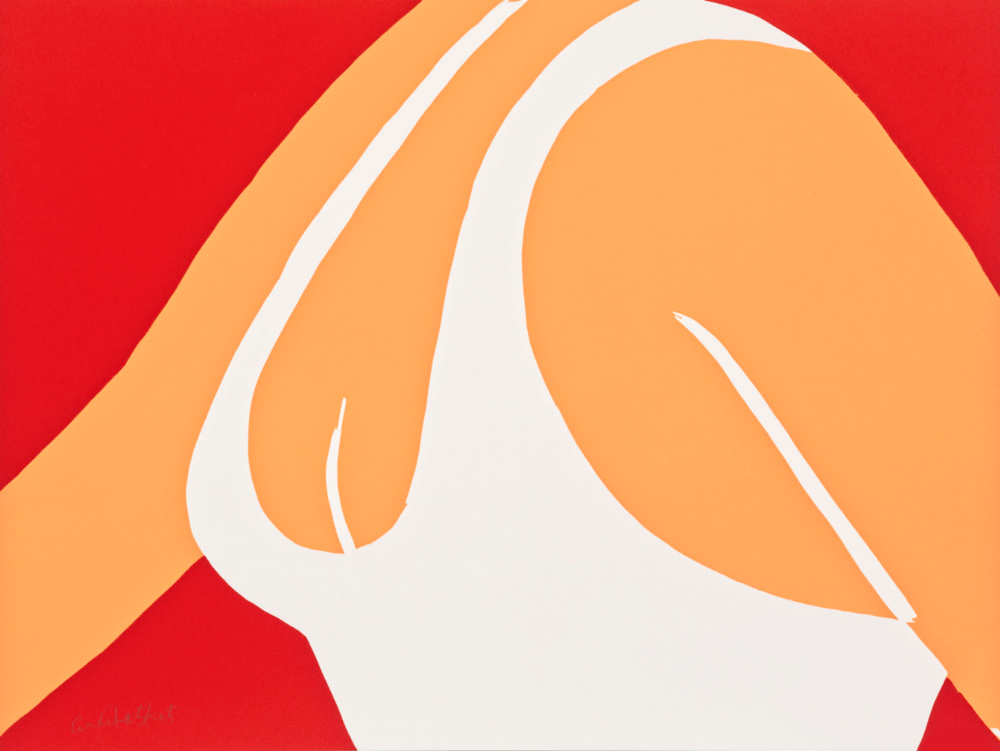 An energetic image from Alex Katz’s Coca-Cola Girl series, this woodcut is an outstanding image of an iconic figure, the Coca-Cola girl. First appearing in Coca-Cola advertisements as early as 1891, Coca-Cola girls came to dominate the company’s advertising strategy. This image, which focuses on the woman’s torso, stays true to the beverage giant’s corporate color scheme. Other than the hues of her peachy skin tone, the image is defined by the juxtaposition of rich red and pure white. This color combination speaks for itself and is a duo that is imprinted in the mind of any modern consumer. Her torso, depicted in motion, caught in the moment of twisting slightly away from us, is front and center against the red background, as if to place her firmly against the backdrop of Coca-Cola itself or in a Coca-Cola world. The suggestively cropped image plays on the sex appeal that Coca-Cola girl advertisements often relied upon and Katz does his best to stay true to the source imagery. Katz’s work captures the same dynamism as the original advertisements but presents the icon of the Coca-Cola girl with a different perspective, one that is hinged on elevating commercial art imagery. This image is a snapshot of the moment from which it is taken, but the work is communicative and evocative enough to speak to a moment where Coca-Cola girls are no longer commonly seen on billboards and TV screens.

Created in 2021, this woodcut in colors on Somerset 300 gsm paper is hand-signed by Alex Katz (Brooklyn, 1927 - ) in pencil in the lower left image and numbered from the edition of 75.

Catalogue Raisonné & COA:
Alex Katz Coca-Cola Girl Pl. 2, 2021 is fully documented and referenced in the below catalogue raisonnés and texts (copies will be enclosed as added documentation with the invoices that will accompany the sale of the work).

About the Framing:
Framed to museum-grade, conservation standards, Alex Katz Coca-Cola Girl Pl. 2, 2021 is presented in a complementary moulding and finished with silk-wrapped mats and optical grade Plexiglas.

Sell your Alex Katz fine art with us. We offer free evaluations. Learn more about selling with us.